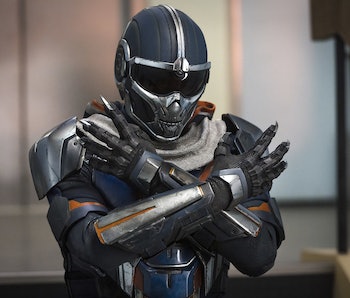 With the Avengers disassembled, is it time for the Thunderbolts to strike?

As the Marvel Cinematic Universe enters its new phase, including both Disney+ series like Loki and The Falcon and the Winter Soldier and films like Black Widow, a group of heroes and reformed villains are slowly assembling — and might be destined for something greater.

With appearances by William Hurt’s Thaddeus Ross (a recurring MCU character) and the anti-hero Taskmaster, as well as a post-credits scene in which Yelena Belova (Florence Pugh) is recruited by the shadowy Valentina (Julia Louis-Dreyfus), Black Widow is the most extensive proof to date that the MCU is putting together a new group of “Avengers,” one made up of less than clean-cut heroes who’ll still get the job done.

Who are the Thunderbolts?

While the first incarnation of the Thunderbolts in comics were a ploy by the Masters of Evil, subsequent iterations have since seized opportunities to do good. The first team was formed by Baron Helmut Zemo (Daniel Bruhl in the MCU), who recruited former members of the Masters of Evil to pose as new superheroes. He sought to gain public trust and S.H.I.E.L.D. secrets using this team, only to sell those secrets to the vast criminal underworld. Later, through Hawkeye’s leadership, the Thunderbolts became a real superhero team and set out to redeem themselves.

Over time, several versions of the Thunderbolts have come together and split up, with one led by Thaddeus “Thunderbolt” Ross (whose nickname is not a nod to the God of Thunder). At the time, Thaddeus possessed the powers of the “Red Hulk.”

Black Widow and the Thunderbolts

Black Widow, now in theaters and on Disney+, makes a major case for the Thunderbolts being formed in the MCU.

One key piece of evidence here is Hurt’s portrayal of Thaddeus Ross. In Captain America: Civil War, Ross reveals he suffered a heart attack and underwent surgery. In Black Widow, which takes place shortly after Civil War, Ross is still recovering; he appears sickly and walks with a cane. (He seems healed up by Infinity War, when he appears in a hologram conference with Don Cheadle’s War Machine.)

There’s already suspicion from fans on Reddit and TikTok that Ross’ condition may worsen, forcing him to turn to drastic measures. One possible cure for his illness could be cosmic rays and gamma radiation, which could turn Ross into the Red Hulk, just like in the comics. (Ross made his first appearance as the Red Hulk in Hulk #1, published in 2008.)

This aside, there’s no disputing that the comics’ Thunderbolts lineup has changed many times over the years, and its members have included multiple characters presently in the MCU: Yelena (as “Black Widow,” although this was actually Natasha Romanoff in disguise), Thaddeus Ross (as “Red Hulk”), Hawkeye, Taskmaster, Ghost (from Ant-Man and the Wasp), Baron Zemo, and John Walker (from The Falcon and the Winter Soldier).

Naturally, this isn’t every character that’s ever been in the Thunderbolts, nor have these characters all appeared in one united version of the team. However, the MCU remixes comic-book storylines all the time; if the studio wanted to create a new Thunderbolts lineup, it’s already introduced enough characters linked to the team to do so.

Lastly, one must consider Valentina. While her role in the MCU is still unclear — is she a good guy or a bad guy? — she’s clearly trying to set in motion the creation of something. She hired John Walker for a reason, and she’s just sent Yelena to go after Clint Barton/Hawkeye — even though Clint wasn’t responsible for killing Natasha to get the Soul Stone on Vormir.

Out of all the signals the Thunderbolts are headed to the MCU, Valentina’s introduction feels like the biggest hint. Whatever her motivations, and whoever else supersedes her in whatever shadowy bureaucracy she belongs to, the character signifies a mystery future films will surely help solve. As for now, the skies of the MCU are changing colors; and perhaps, based on the evidence at hand, there’s a storm coming.

Black Widow is out now in theaters and Disney+.