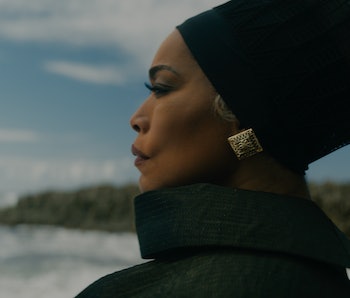 Here’s what happens in the post-credits scene of Black Panther: Wakanda Forever, how it might relate to the comics, and what it means for the future of the Marvel Cinematic Universe.

At the end of Black Panther: Wakanda Forever, Shuri (Letitia Wright) finds a way to create a synthetic herb to replicate the magical powers of the Black Panther. To save Wakanda from Namor (Tenoch Huerta), Shuri takes the herb and makes herself the new Black Panther.

After a truce is formed between Wakanda and Talokan, Shuri visits Nakia (Lupita N’yongo) in Haiti. It’s there on the beach that Nakia introduces Shuri to a surprise new character in the MCU: T’Challa’s son, also named T’Challa. (Let’s call him T’Challa Jr.)

As it’s revealed via dialogue, Nakia had T’Challa’s child before the Blip (we assume he was conceived before the Snap and born after it) and raised him in the years he vanished. It’s possible T’Challah met his son in between the events of Endgame and Wakanda Forever, but that’s never stated outright.

At T’Challa’s request, their son was kept away from Wakanda. But T’Challa Jr. is recognized by the crown. He met his grandmother, Queen Ramonda (Angela Bassett) at some point before the movie’s events and may some day take his place as king.

While Black Panther 2’s post-credits scene is powerful on its own, it also functions as a form of insurance for this evergreen franchise. By establishing that T’Challa has a son, it allows the MCU to have a new T’Challa (without replacing or “recasting” the late Chadwick Boseman) to take over from Shuri in the future. With the MCU inclined to do things like time jumps and time travel, it’s not unfathomable that this might happener sooner rather than later.

There is also some precedent in the comics, albeit with a few critical differences. In Brian Michael Bendis’ Avengers comics relaunch in 2010, the Avengers visit the alternate Earth-10943. There they meet the “Next Avengers,” the descendants of that Earth’s first generation of Avengers. Among them is Azuri T’Challa, the son of T’Challa; and Ororo Munroe, better known as the mutant Storm.

Azuri has only made a handful of appearances in comics since his debut twelve years ago, so there aren’t many stories to draw from when it comes to future Black Panther sequels. But T’Challa Sr. still had many stories to tell before Boseman’s passing. Now that the MCU has a “new” T’Challa in the MCU, the franchise can tell those stories. (Awkwardly, this does also mean T’Challa can still date Storm, even if it all feels just a tad too much like Back to the Future for comfort.)

Shuri has only just started her journey as the new Black Panther, so it will be a while before T’Challa Jr. carries on his father’s legacy. But with the MCU heading towards a fight with the powerful Kang the Conqueror, and 2026’s Avengers: Secret Wars primed to blow open all kinds of multiverses and timelines, it’s not far-fetched to believe we’ll see a son accept his duties sooner than we might think.