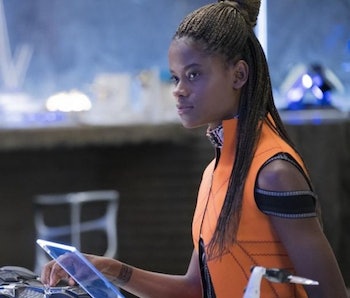 The world of Wakanda will have to wait. After the tragic loss of Chadwick Boseman, it seemed like the heir apparent of the Black Panther title would be Letitia Wright’s Shuri, but that decision was fraught with its own issues. Wright suffered an injury on set, which led production to pause filming for the time being.

What’s more, Wright is very expressive about her views concerning the Covid-19 vaccine, which may have its own consequences towards production. With non-citizens being subjected to vaccine mandates, it’s possible that Wright’s reluctance to be vaccinated could mean further logistical obstacles. At what point is the trouble not worth it? Maybe it’s time for the franchise — and the fanbase — to simply move on.

Even though Black Panther: Wakanda Forever is currently in production, there are still many solutions that the Marvel project could make. The first and most obvious option is to cast someone other than Letitia Wright to play Shuri. Marvel can simply recast the role without calling attention to the change. This isn’t unprecedented at all in the MCU, with both James “Rhodey” Rhodes (played by Terrence Howard and Don Cheadle) and Bruce Banner (played by Edward Norton and Mark Ruffalo) changing actors over the course of multiple films.

If Loki can team up with a female version of himself, there’s nothing saying a parallel Shuri couldn’t pick up where the “Sacred Timeline” version left off.

Fans responded well to the recasting of previous characters, especially the WandaVision meta “recasting” of Evan Peters as Ralph Bohner. If that change, or Don Cheadle as Rhodey, could be just laughed off, why not a recast Shuri?

It’s hard not to draw lines between this controversy and Gina Carano’s firing from the cast of The Mandalorian. But while Cara Dune could easily be written out of The Mandalorian’s narrative, Shuri is a pivotal part of Wakanda’s future, now more than ever. With part of Wakanda Forever already filmed, it might be a bit too late to sideline the character to make room for someone else, but recasting the character either through an unacknowledged replacement or a multiversal explanation may be the only solution.

Of course, this issue would cease to exist if Wright would comply with government recommendations and get vaccinated. Her injury is not her fault, and she shouldn’t be held responsible if the injury is truly the reason behind the halted production. But her vaccination status, which is the next major obstacle the sequel is facing, can be easily remedied.