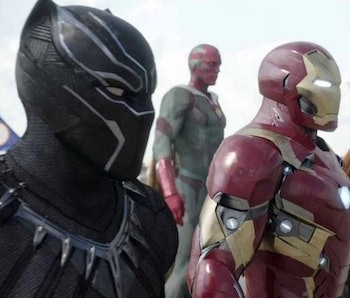 The Avengers are entering a new era. Gone are the days of establishing the tentpoles of the Marvel Cinematic Universe. Now, everyone in their universe and ours knows Iron Man.

As a result, the spotlight is moving to the next generation of heroes. Hawkeye has handed his bow down to Kate Bishop, Yelena is out to avenge her sister Natasha, and Kamala Khan is crafting an identity inspired by her hero Captain Marvel. Meanwhile, Sam Wilson has already suited up as the new Captain America, while Black Panther 2 is set to introduce the MCU to its Tony Stark replacement in the form of IronHeart.

But how much will these legacy Avengers intersect? A new leak courtesy of Anthony Mackie himself seems to tie the new Captain America with the new Iron Man. Here’s how.

What happened — In a red carpet interview with E! at the 2022 Grammys, The Falcon and the Winter Soldier star revealed he’s visited the set of the upcoming sequel Black Panther: Wakanda Forever and called it “spectacular.” The film has finally wrapped filming after a long and arduous path to production, but why would they need Anthony Mackie on set?

Mackie insisted he isn’t in the film, but why else would he be visiting the set? And after the fiasco regarding the bald-faced lies Andrew Garfield told the press regarding his role in Spider-Man: No Way Home, it’s hard to trust any actor’s press statements. (Did anyone else notice how his voice cracked on “not” when asked if he’s appearing in Black Panther 2?)

Is Anthony Mackie in Black Panther 2?

A Sam Wilson appearance in Black Panther 2 would make perfect thematic sense, as well. Leaks have previously shown the movie was filming around MIT, meaning we’ll probably see the MCU debut of Riri Williams, the MIT student and engineering prodigy who becomes Ironheart and takes Tony Stark’s place among the Avengers.

Like Riri, Sam Wilson is a Black person taking up the mantle of a white Avenger. She’s the next Iron Man, and he’s the next Captain America. Even if his role is limited, having him appear to offer mentorship to Riri would be exactly what her story needs.

Black Panther: Wakanda Forever is no longer just about the Wakandans interfering with the real world, but the next generation of heroes in the Marvel Universe — a generation that reflects the real America, not the one in the comic books or in patriotic propaganda. There’s no better representation of that than the new Captain America, a Black man who just wanted to keep his parents’ fishing boat within the family.

The Inverse Analysis — While it’s still unclear whether or not we can trust Anthony Mackie, a cameo appearance in Black Panther 2, no matter how small, would be the perfect addition to not only his story, but his fellow Avengers facing rather large shoes to fill. Even if it’s just a post-credits set-up for Captain America 4.