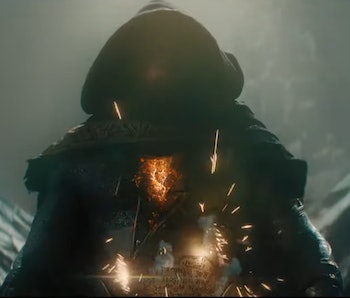 Dwayne Johnson has said the hierarchy of power in the DC Universe will change with Black Adam. Finally, at DC FanDome, we can see what he’s talking about.

What Happened? — At DC FanDome, which kicked off on October 16, Dwayne Johnson introduced the first clip of his upcoming DC superhero movie, Black Adam, in theaters on July 29, 2022.

Ever his own best hypeman, Johnson promised the film, directed by regular collaborator Jaume Collet-Serra (Jungle Cruise), will be worth the wait. It’s still in post-production and not yet ready yet to show a full trailer. But on the occasion of DC FanDome, “I felt like I had to bring you guys just a little something special,” Johnson said.

The scene previews the movie’s opening, which Johnson explained shows him in full costume (and at full power) as Black Adam. When an archaeologist and a squadron of gun-toting mercenaries stumble upon an ancient ruin, they awaken Black Adam.

Johnson demonstrates Black Adam’s superhero abilities early on, including super strength, speed, and invincibility. You know, kind of like Superman!

But unlike the Man of Steel, Black Adam operates by his own moral code. That’s demonstrated by Black Adam taking down said mercenaries in pretty brutal ways.

An official upload of the DC FanDome preview of Black Adam isn’t yet available, but you can watch the trailer in Johnson’s tweet below.

Villainous Vibes — Black Adam debuted in DC Comics as a villain for Captain Marvel — not the MCU heroine you’re thinking of, but the DC superhero now known as Shazam. Black Adam’s popularity has allowed him to thrive as his own entity, starring in some of his solo comic books and as the main character in Geoff Johns’ run on JSA in the mid-2000s.

Black Adam’s presence in JSA saw him shift from villain to antihero, allowing Black Adam to take on more complicated moral shades than your average superhero. With Johnson in the role, Black Adam will undoubtedly be a superhero unlike any we’ve seen before.

Given the new teaser, Black Adam may not just be another superhero movie, but a supervillain movie where the “villain” plays the role of a captivating antihero.

Adam. Black Adam. — The Black Adam segment of DC FanDome opened up, funnily enough, with Pierce Brosnan. The actor said that, despite playing James Bond for ten years, his role as Doctor Fate in Black Adam took him by surprise.

Also introduced: Aldis Hodge as Hawkman, Quintessa Swindell as Cyclone, and Noah Centineo as Atom Smasher, who make up the DCEU’s iteration of the Justice Society of America, aka JSA.

The Inverse Analysis — Dwayne Johnson playing the lead in Black Adam is unbelievably exciting, if only because Johnson is finally inhabiting a superhero role he says he was born to play.

Thus far, Johnson’s hype for Black Adam has involved more than a few jabs at Superman. Johnson has frequently spoken about changing the “hierarchy of power” in the DC Universe. If Superman is on top, Johnson has said that his Black Adam will threaten to change that.

But given that Black Adam’s main nemesis has been Shazam, currently played by Zachary Levi, it’ll be curious to see which flying titan Black Adam sets his sights on first.