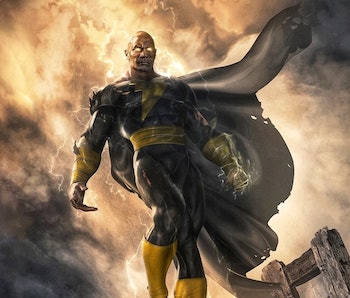 Dwayne “The Rock” Johnson has been hyping up Black Adam for the better part of five years now, offering fans a steady stream of reassurances the movie was still happening. Initially scheduled to be released before Shazam!, Black Adam got lost in the shuffle of Warner Bros.’ scheduling delays. After a long wait, filming was set to begin this year, with a scheduled theatrical release date of December 2021. However, due to all the coronavirus-related shutdowns, The Rock has confirmed that Black Adam is once again being pushed back.

On Sunday night, Johnson updated fans on the status of Black Adam in an Instagram live session. While principal photography was scheduled to begin soon, shutdowns have halted any forward movement on the film for the time being. The wrestler-turned-actor assured fans that the film was still happening, but was experiencing a bit of a delay due to the pandemic. Here’s what he said about Black Adam’s updated timetable:

“We still plan on shooting probably at the end of summer now, probably pushed into the end of August or September. That is a project I hold near and dear to my heart and so I can't wait to get started.”

The journey to get Black Adam to theaters has been long and winding. The film has been in development since 2008, with Johnson attached to star as the titular character for just as long. In November 2019, Johnson unveiled a new poster and an official release date for the film, exciting fans who have been patiently waiting for word on whether the film would ever see the light of day.

Just a few weeks ago, it seemed like everything was in place and ready to roll. Johnson recently posted a 12-minute video detailing his passion for the project, the road to filming, and shared some details about the character’s comic book backstory.

Considering that many films have been reshuffled due to the pandemic shuttering theaters, there’s a chance Warner Bros. will do the same with Black Adam. It’s possible the film’s release date will be pushed to early 2022.

That all depends on when movie production will resume, and there’s still a lot of uncertainty surrounding that issue. That said, even with the slight production delay, it’s still possible for Black Adam to meet its scheduled release date without any further changes. The Rock and the fans have waited long enough.

Black Adam is scheduled to hit theaters on December 22, 2021.