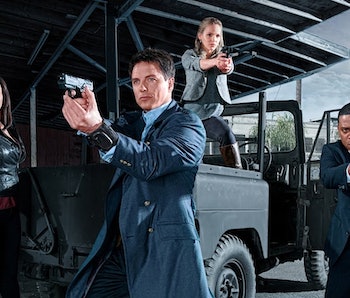 What is the Baywatch Nights of the Doctor Who universe? If your answer to that question was "What is Baywatch Nights?" then, well ... that's a perfectly reasonable response. The point is still the same: way back in 2006, the Doctor Who universe launched a more adult spin-off, took place entirely on Earth, and served as the UK answer to The X-Files — but with a lot more LGBTQ representation, and a lot more fun.

If for some reason you missed out on the greatest and most over-the-top sci-fi show of the early aughts, here's why you should hop onto HBO Max and check out the series Torchwood ASAP — and also why you should never think of it as a goofy Doctor Who spinoff. Mild spoilers ahead for Doctor Who Season 3 and all four seasons of Torchwood.

In 2005, when Doctor Who relaunched with Christopher Eccelston as the 9th Doctor, the series also introduced Captain Jack Harkness (John Barrowman), a former Time Agent who was also a con-man. By the end of the then-new Doctor Who Season 1, Jack also became immortal thanks to some unintended exposure to the time vortex in the episode "The Parting of the Ways."

But you don't need to know about any of this stuff when you watch Torchwood. It's all made very clear in the first episode.

An alien-hunting organization secretly operating on Earth, Torchwood's original mission was to fight the Doctor and other alien interlopers. But then Captain Jack (also an alien, technically) took over one sect of the group, called Torchwood 3, rebooting the clandestine group so they only fought bad aliens, and actually act as a de facto protector of the Earth while the Doctor was away.

This might sound kind of high-tech, but the charming thing about Torchwood is the fact that their slickness comes more from the fact that they just know about things that other people don't know about, rather than their gizmos. They basically drive around in a family SUV, looking for aliens to bust.

In the early seasons, the production value scans like a soap opera, or a slightly low-budget BBC production from 2006. But that's part of the essential charm of Torchwood. The aliens the team tangoes with all range from absurdly scary, to totally hilarious. In the episode "Day One," the team encounters an alien that kills people when they have an orgasm. This was the second episode Torchwood ever aired and it's borderline hysterical. Later, the miniseries Children of Earth (listed as Season 3 on HBOX Max), things became more serious — this alien species took control of only the children of our planet and sent creepy messages through all of them. Even the slightly disparaged "Season 4" of Torchwood, dubbed "Miracle Day" attacks a really cool science fiction premise: What if everyone on Earth was suddenly unable to die?

You don't need to know or love Doctor Who to know or love Torchwood, but if you do? You will be rewarded with some Easter eggs and references here and there to that beloved blue box and the Time Lord who lives in it.

Current Doctor Who showrunner Chris Chibnall wrote a ton of Torchwood episodes, including the explosive "Kiss Kiss, Bang Bang" which features the return of Jack's old-lover and Time Agent rival John Hart. With plenty of time travel romances and hidden secrets, there is again this soap opera quality to some of Torchwood's melodrama. When the lead character was referred to as "Captain Beefcake" in one episode of Doctor Who, you have to expect a slice of kitsch with your alien-hunter show.

To be clear, Torchwood doesn't always deliver, but the cast is also fantastically fun to watch. Also, the romance between Jack (Barrowman) and Ianto Jones (Gareth David-Lloyd) is tender and perfect. When these guys finally get together, it's way better than Mulder and Scully.

In its opening monologue, Torchwood told us that "the 21st century is when everything changes." It's a shame more sci-fi shows didn't change to be as relentlessly fun as Torchwood.

Still not sold? Did I mention the Torchwood team has a pet pterodactyl? Seriously: HBO Max, right now. Don't wait another second.

Torchwood is streaming on HBO Max.

More like this
Entertainment
5.13.2022 10:00 AM
Upload renewed for Season 3. How much longer can Amazon’s best show last?
By Eric Francisco
Entertainment
5.11.2022 11:00 AM
Steven Moffat on J.K. Rowling's anti-trans stance: "Just be nice"
By Dais Johnston
Entertainment
5.9.2022 11:31 AM
You have to watch the most underrated time travel show on Hulu ASAP
By Ryan Britt
Related Tags
Share: