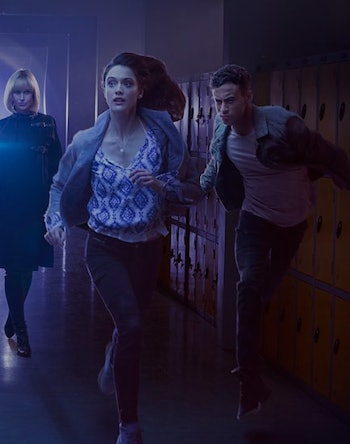 Historically, Doctor Who spin-offs have run the gamut from the bumbling K9 to the racy and often terrifying Torchwood. It’s not hard to imagine why the results are so varied: the Whoniverse itself is exactly that kind of wild and ever-reaching place. Fans are often left breathless at the emotional depth and world-building of the show only to find themselves 2 seconds later laughing at a hapless Doctor and his beleaguered companion.

That Doctor Who has mastered the balance despite its scope is what often makes it incredibly difficult for Doctor Who spin-offs to succeed. Throw in a bunch of angsty teens, dealing with parents, first loves, and aliens on top of that and it’s almost too many plates in the air to juggle without dropping. But Patrick Ness, showrunner of BBC’s latest attempt, Class, thinks he’s found the key to unlocking Who’s success, and it’s by largely ignoring the fantastical world of the Doctor altogether and focusing on those left behind.

Inverse caught up with Ness before the Class season premiere in the U.S. to talk about stepping out from under the shadow of Doctor Who, creating grounded stories in sci-fi worlds, and why teens are so damn important.

We spoke a little bit at New York Comic-Con, and I remember you telling me you were a really big fan of Doctor Who. What got you into the series?

When Doctor Who got rebooted in 2005, that’s when I started watching, because I was a real admirer of Russell T. Davies. I love that kind of combo when somebody unexpected comes in. So I started watching it and haven’t missed an episode since.

I love the darkness of the reboot. I love that it does what all the best sci-fi does, which is pose difficult moral questions that are sometimes unanswerable. I like that kind of bravery. It has a certain kind of realism, because sometimes good people die and sometimes doing the right thing will make everyone hate you. That feels like real life to me.

I remember certainly as a young person, I hated stories that tried teaching me lessons that didn’t reflect what life was like. I think Doctor Who within its sci-fi universe, in the world of aliens and time wars and so on, is surprisingly challenging about the decisions you actually have to face, which as a young person I definitely was hungry for.

So how did you get involved with Class then? What did it feel like to be tapped to enter into the historic Doctor Who canon?

Did BBC come at you with a Coal Hill School, teen, supernatural drama pitch? Or did that come from you? Because you’ve written all kinds of YA novels …

Well, your sentence was about all they had. They had a few ideas around a drama set in Coal Hill, that was about it. I had different ideas, and I explained why I had those ideas, and how I would build on that. They actually first came to me to ask if I wanted to write an episode of Doctor Who.

But that fell through?

Yeah, it was a funny old time because normally I would have leapt at it, but I had just finished a bunch of work for other people, and I was extremely eager to do something that was just mine because I felt that I had spent enough time adapting, essentially. So I said, “You know I’d love it if you’d come back to me,” and they said, “Well we’re also thinking of this other thing, sort of, maybe.” And that’s when they mentioned the Coal Hill idea.

And then how did you go about developing the show with BBC? What was the moment when you thought, “Oh, I feel like this is really mine, but I know it’s going to fit really well into Doctor Who canon?”

Kind of day one. I mean I wouldn’t have done it if I didn’t feel like it could be something of mine, because then you can’t put yourself into it. That’s a real important thing for my writing. I think if any of my reasons for writing are cynical, a reader or viewer is going to be able to tell in an instant.

So then I worked up a pitch and got permission to write the pilot and did that. And just because of how I like to write and how I sort of view writing, I’m quite comfortable fitting into parameters because I was raised by a quite religious family. That’s how I rebelled: I would follow the rules exactly while still getting away with what I wanted. So that’s kind of how I view writing.

So you were a white lie kind of kid.

Yup, I would do exactly what I was told to do, and then I would just do other stuff, you know? I hadn’t broken the rules, so that’s how I kind of viewed it.

And I loved the idea. The Who universe is so rich. It’s embarrassingly rich. It’s 54 years old this year. It’s literally all of time and space. It has all these mythologies that it’s really worked on and gotten deep into.

I liked the idea of saying, “I have no interest in disrespecting this at all. I love having a part here, but what does it look like through a different set of eyes?” And that to me is always more interesting. How does this universe that we all know so well look from the point of view of the bystander?

Or you know, we talk a lot in Class, about the people who get left behind. The Doctor comes and he changes your universe for you. He changes the way you think about everything that’s ever happened in the universe and then leaves. And we follow him because that’s the show. But what happens to the people who stay behind? And how are they facing the changes in their lives? That’s where Class came from.

And at what point, if at all, did Steven Moffat sort of get involved? And how much did he help you out and bring this thread to fruition?

Well, we talked a lot. But that was more on a script note level of what he felt worked and the kind of pacing that the show had. He was doing a season of Sherlock at the time we were editing the season, so I often took the opportunity just to go off by myself. But that was a real comfortable fit for me.

At the very beginning, Steven said, “I have made every mistake at least twice. That’s the best thing I can offer.” And I really appreciate that kind of advice. And it’s kind of what I tell other people now, that I’ve made this mistake, so please don’t make it yourself.

So I remember you told me at New York Comic Con that it was really important for you to showcase British teens as they actually are, which is why you have a very diverse cast. But, unlike most shows, Class delves into each background with really great specificity.

For example, I’m Indian-American, so when I saw Ram in the pilot, and I saw him wearing his kara (a traditional silver bracelet), I was like, “Oh! He’s Sikh.” And that’s incredible that somebody did the research to put that visual indicator in there well before there’s any exposition on his background. Can you talk about how you conceived and researched these individual characters and what their backgrounds add to a normal coming of age story?

Yeah, we are always on the lookout for stuff like that. Our set dresser is Sikh, so I’d ask her a lot of stuff, and I did all sorts of research. But part of it is, you get tired of the same voices. I do. Don’t you?

I feel like I’ve already seen the same stories many many times. As a storyteller, I’m always looking for fresh eyes. Plus, I live in London. London is the most international city in the world, and how boring a show would it be if it were just the same old people that you’ve seen before. It wouldn’t be London. I always think that if you’re not reflecting the world as it actually looks like, then how can we believe you that you’re telling the truth about other stuff.

That’s kind of that question that April asks when they’re away from Earth later in the season. She says, “How can you see all this and still believe?”

That’s an interesting question to me because there are definitely teenagers who believe. So, how would you react if your universe was changed this way. I think if you’re not doing that, you’re really cutting yourself off from storytelling richness.

Nevermind that it’s the right thing to do. It’s also the truthful thing to do, and you’re going to get a better story out of it.

I think it’s really telling that there are no easy monster of the week episodes for these kids. They go from 0 to 60, and each episode has an emotional impact on the one after it, which was one of my favorite things about Class. It really touched on the mental health and the repercussions of being involved in this world in a way that Doctor Who often doesn’t just for time limitations. Can you talk about why you chose to include that very real PTSD/mental health element especially when it comes to teenagers?

It certainly has a terrible effect on Ram. Poor Ram has a terrible first couple of episodes. He has such a bad time. But that interests me because people face, obviously not to that extreme, but teenagers face difficult situations constantly. And what do we tell them that’s actually dealing with the truth of it, rather than just saying, “You’ll grow out of it?”

So, a lot of modern teenage fiction is trying to address that problem by saying, “Yes, the problems you face are actual problems. It doesn’t matter that you’re young.”

Of course, it’s heightened because it’s a television show, but that’s why I’m interested, because I wasn’t getting that when I was a teen. Thank God for YA now.