“Negotiation's over. Sentence is death.” 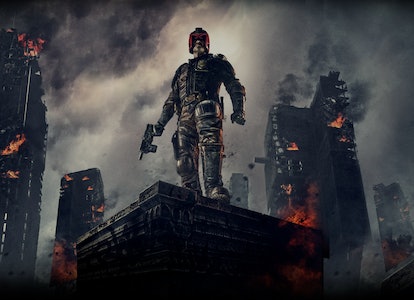 The United States is “an irradiated wasteland.” People live in a “cursed city” housed in mega-structures within the collapsed remains of old cities like Boston and Washington D.C. What do they call these cities? Well, they have mega-structures. Mega blocks. Mega highways. So they call the city “Mega-City One.”

Delivering by Karl Urban, this opening monologue gets right to the point. You could say the same about everything in Dredd.

Directed by Pete Travis, written by Alex Garland, and released in 2012, the movie stands distinctly apart from other comic book movies from the time. The year was filled with franchises either ending (The Dark Knight Rises), entering new phases (The Avengers), or getting rebooted (The Amazing Spider-Man). There was hope for all these, with critics saying 2012 could be “the year of the smart superhero movie.”

Unlike any of those movies, Dredd is built to stand on its own. Garland, who would later go on to direct stunning sci-fi properties of his own like Ex Machina and Devs, had started writing the movie in 2006 with the hopes of avoiding the mistakes of 1995’s Sylvester Stallone mess Judge Dredd. Looking back on that movie, Stallone once remarked that “the philosophy of the film was not set in stone” during the shoot, meaning no one on set was sure if they were making a drama or an action-soaked comedy.

Garland would not make any such mistake. He decided to do away with much of the rich world developed in the British magazine 2000 AD, like cloning and lunar colonies and the undead. Similarly, he decided against origin stories. In an interview, he said he wanted to “do Dredd in a way that did justice to the character in the comic books.” That is to say: a street-level judge, jury, and executioner who has no clear motivations beyond doing his job.

Fealty towards comics is often displayed by movie adapters, but when it’s backed up by a co-creator (John Wagner) coming on as a consultant, it becomes clear that Garland wanted to show Dredd as a stoic, fully-formed character against which all others judge themselves.

The plot is simple. Dredd is assigned a rookie Judge, Anderson (who appears in the comics and is, as there, psychic). Dredd and Anderson explore a triple-homicide at a mega-tower known as Peach Trees. They connect the murders to the drug lord Ma-Ma (a pre-Cersei Lannister Lena Headey), who promptly shuts the building down and orders their death over a P.A. system.

While the plot is lean, Travis and Garland used the cruel, uncaring world of Peach Trees to experiment with a visual trick that would get called “Slo-mo.” A popular drug in Dredd, Slo-mo significantly slows down a user’s perception of time, turning the everyday into the surreal. The viewer sees acts of tremendous violence from the perspective of a Slo-mo user, with menacing bright colors similar to those that Garland would later use in Annihilation.

Garland has called the Slo-mo scenes “the hardest to get right,” but also his “favorite stuff of the film.” Given the movie’s main color palette consists of concrete grey with dashes of red and black, Slo-mo offers not just its users, but also the filmmakers, a chance to escape. Getting tossed out of a 200-story window can suddenly seem like an angel falling from Heaven.

There are many questions someone watching Dredd could ask: who are these Judges, and why is this system of government in place? What government is there, beyond the Judges? These are questions answered in comics that Garland chose to ignore. One comic book arc, beginning with 1986’s “Letter From a Democrat,” began to explore the idea that Mega-City One and its Judges were a fascist state, with Dredd announcing that “democracy's not for the people.” Given how the character of Dredd resists any sympathy on his own, telling the moviegoing public to cheer for an openly fascist state might have been a hard sell.

Rather, the movie simply makes clear that the world they all inhabit is terrible. Dredd scoffs at Anderson’s ideas about making Peach Trees a better place, and corrupt Judges mock him in turn for believing in anything. Caught in the middle of these fights are masses of people forced to continually flee for their lives, often getting caught in the crossfire of endless battles.

In many ways, Dredd feels like a precursor for one of the decade’s greatest action movies, which would arrive just a few years later — Mad Max: Fury Road. A stoic, nearly anonymous hero who is forced to take on an army, bold and colorful visual effects, strong roles for women, and above all, a sense that moving equals survival. Keep running, stay alive.

Dredd is streaming now for free on Amazon Prime.