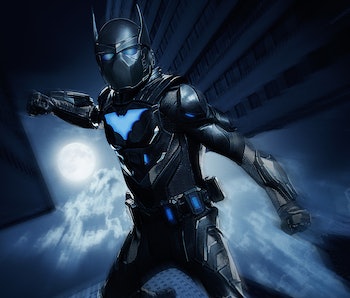 A new hero is coming to Gotham City, and you’ve got to see his costume.

Next season on Batwoman on The CW, actor Camrus Johnson will graduate from “guy in the chair” to “guy in a mask” when his character, Luke Fox, fulfills his destiny to become Batwing. This is the first time the character has ever appeared in live-action form and, frankly, his small-screen arrival is long overdue.

On Tuesday, June 8, The CW announced that the third season of Batwoman will feature the debut of Batwing, a superhero alter-ego Luke Fox uses in the DC Universe. At this time, the season’s release date is unknown.

Plot and story details are additionally scarce, but Johnson teased in a statement to press that his ascension to the role of superhero will require Luke to “overcome his own personal demons.”

In Season 2 of Batwoman, starring Javicia Leslie in the title role, Luke tangled with the villain Tavaroff (Jesse Hutch), a story that ended with Tavaroff leaving Luke for dead. But Luke survived, resolving to go after Tavaroff.

"Honestly, it's hard to explain how much it means to me to wear the Batwing suit and officially play my first superhero," said Johnson in a statement. "The main reason I wanted to be in Batwoman was for this opportunity... to give kids like me another Black hero to look up to and relate to. It's hard not to smile when I catch myself in the mirror with the bat symbol on my chest.”

Back in 2019, Johnson told Inverse he wasn’t privy to any plans for him to play Batwing, but he was preparing in case the day ever came when he was asked to don the armor.

“The writers are very smart about not telling me what happens,” he explained at the time. “Obviously I would love to play [Batwing], that would be so many dreams come true. I’m hoping for it to happen. But I don’t know where things are gonna go. The past couple months I’ve been boxing. I don’t want Luke to be bulky because he is the man in the chair, but I want to be prepared if they surprise me and Luke is going to be in awesome tights.”

Johnson was able to avoid at least that surprise, based on the photo above: he’s definitely wearing armor.

Batwing has been in the DCU canon for about a decade. The identity, first held by Congolese police officer David Zavimbe, first appeared in Grant Morrison’s globe-trotting Batman Incorporated comic-book series in 2011. But it wasn’t until Batwing #19 in 2013 when Luke Fox took up the mantle; he has gone on to appear in video games like DC Universe Online and the animated film Batman: Bad Blood, in which he was voiced by Gaius Charles.

Though not a “sidekick” of Batman in the way the Robins are, Batwing is a strong member in the Bat-Family who has plenty to offer, though his actual comics have been hit-or-miss. The Judd Winick-penned issues of Batwing, which followed David Zavimbe fighting crime in Africa as Batwing, was incredible stuff that creatively eclipsed the longer Justin Gray/Jimmy Palmiotti run (which centered on Luke Fox using the identity in Gotham City).

With heavyweights like Nightwing and Batgirl in the equation, it’s still been easy to overlook Luke Fox. Though he’s been Batwing for some time, he has yet to have a defining moment in the comics on par with ones other characters of the Bat-Family have experienced. But it’s hard to dislike a guy who’s just trying his best, whose hands are full kicking villainous butt and fixing gadgets that get broken in the field.

With Johnson bringing the identity to a mainstream TV audience, we’re keeping our fingers crossed for a new Batwing comic book that lets the character soar to greater heights. Perhaps that day will come sooner than we think.

The same day The CW announced Batwing’s upcoming TV debut, DC Comics published Batman: Urban Legends #4, an ongoing anthology that contained a story about Batwing — written by none other than Johnson himself, making his comics writing debut. It’s difficult to imagine a better individual to tackle the character on the page than the actor tasked with doing exactly that on screen.

Batwoman Season 3 does not yet have a release date on the CW.