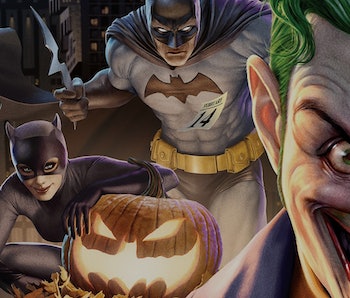 DC’s track record with live-action movies is spotty at best, but the company excels when it comes to animated comic book adaptations. The Killing Joke aside, some of the best DC movies in recent memory were animated, and Batman: The Long Halloween is no exception.

Based on the limited series comic from writer Jeph Loeb and artist Tim Sale, the two-part animated movie just released Part 2 on July 27. Batman: The Long Halloween Part 1 currently has a 100 percent approval rating on Rotten Tomatoes, while Part 2 doesn’t have a score yet, but seems to be a hit among fans.

Part 2 is available to buy online or via Blu-ray for $20, and you can currently rent Part 1 for $5). But when will Batman: The Long Halloween join the rest of the DC animated library on HBO Max?

What is Batman: The Long Halloween’s HBO Max release date?

Warner Bros. doesn’t have a great track record of getting new animated DC movies onto HBO Max. (Possibly because they still make good money on the VOD market.) Inverse reached out to Warner for any information on when Batman: The Long Halloween might release on HBO Max and received the following non-response:

At this time, there is no date on when it will be available on HBO Max.

That said, in HBO Max’s short existence so far, a pattern has emerged. On January 1, 2021 the service added a lineup of new DC animated films, including Superman: Man of Tomorrow, which premiered in August 2020.

As one Redditor points out, DC seems to dump these cartoon films on HBO Max at the start of the year. Based on this theory, Batman: The Long Halloween Parts 1 and 2 could both land on the streaming service on January 1, 2022. Unfortunately, if that’s true, it means they won’t be available to stream for another five long months.

Then again, maybe Part 1 will arrive sooner. Or Maybe they’ll both hit HBO Max even later than January 1. For now, all we can do is make an educated guess.

Who’s in the Batman: The Long Halloween voice cast?

Ask and ye shall receive. Here’s the impressive full cast:

Where can I watch Batman: The Long Halloween right now?

Parts 1 and 2 are both available wherever you get your digital movies, whether that’s Amazon, Apple, Vudu, or somewhere else. You can also purchase physical Blu-ray copies if you prefer from Amazon, Target, Walmart, Best Buy, or any other retailer.

Batman: The Long Halloween in available now on VOD and Blu-ray.