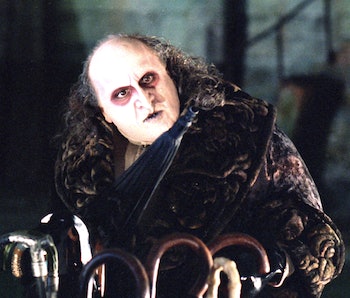 Matt Reeves’ The Batman seems to be taking the Dark Knight in a bold new direction. Set to explore Bruce Wayne’s second year as Batman — a rare divergence from the origin story framework of previous films —The Batman will include several of the caped crusader’s most fearsome enemies. A newly leaked set video may hint at what to expect from one villain’s plot.

Production on The Batman has already begun in London and a set video has surfaced on Reddit. The video is very brief, but it shows a man jogging through a park in broad daylight when he’s suddenly attacked by a group of men in hoods and hats. He falls to the ground, unconscious. The men ridicule him for a bit before one of them pulls out his phone to snap a picture of the victim.

The attack itself isn’t all that intriguing. It’s Gotham and crime is high, after all. Rather, it’s the identities of the attacking men that’s noteworthy. From afar, they look like they’ve painted their faces with clown makeup, hinting that the attackers might be the Joker’s men. However, Joker isn’t in The Batman and, upon closer inspection, the men’s faces are painted in black and white.

We know that Colin Farrell has been cast as the Penguin and these men could be his goons. In the comics, The Penguin’s henchmen are the most ruthless of Gotham’s gangs, harassing fellow Gothamites wearing white and black makeup on their faces. Considering they’re the Penguin’s henchmen, the black and white makeup marks them as such. Take a closer look below.

What’s more, they’re Gotham’s most dangerous criminals, some of them former mercenaries. While Joker and other villains also have their own gangs, Penguin’s henchmen are handpicked and trained by the man himself. So these are not your everyday pickpockets. They’re hostile professionals.

While the video footage doesn’t reveal too much about The Batman, the henchmen’s appearance in the movie implies that The Penguin will have a significant role. With both the Riddler and Carmine Falcone running rampant in The Batman, it's hard to tell how big of a role any of them will play, though there’s a chance they’ve teamed up together. Take a peek at their comic counterparts below.

Now that Robert Pattinson's Batman suit has been revealed, expect more set photos and potential videos to make their way online in the near future. In terms of the aforementioned video footage, it’s possible these men attacked the jogger because he got on The Penguin’s bad side. It would certainly explain why his goons are after him. Perhaps the jogger is an influential man who’s trying to thwart the villain’s hostile takeover of the city. Taking him out in broad daylight sends a clear message.

On the other hand, it’s possible that the jogger just happened to be a random victim and the henchmen’s attack is to assert Penguin’s power over Gotham and scare its citizens. Either way, Penguin’s on the prowl and up to something devious. Sounds like a job for Batman.