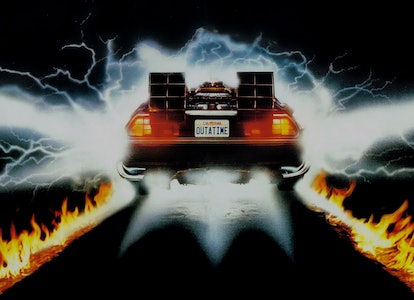 There are plenty of iconic movies about time travel. Science-fiction filmmakers have been playing around with the concept for well over 100 years now, and storytellers have found an endless number of ways of depicting it in that time (to varying degrees of success). The phone booth in Bill and Ted and the extra-dimensional bookcase in Interstellar are just a few examples of the creative ways filmmakers and writers have chosen to represent and visually communicate time travel in their films.

But when it comes to time travel on the big screen, there’s no image (or method) more iconic than a silver DeLorean racing towards 88 miles per hour. Lucky for us, there’s never been a better time to rewatch the entire Back to the Future trilogy.

When you think of lighthearted sci-fi films, it’s hard to think of any better example than Back to the Future. All three movies follow the same basic formula: Marty McFly (an unbelievably charismatic Michael J. Fox) must travel in time using Doc Brown’s (a delightfully kooky Christopher Lloyd) customized DeLorean and fix mistakes in the past in order to correct (or improve) the present.

Rather than letting their similar structures detract from their quality, director Robert Zemeckis and screenwriter Bob Gale use the plot similarities between the three Back to the Future films to their advantage. Together, Zemeckis and Gale fill the Back to the Future sequels with callbacks and recurring gags (just look at how many times Thomas Wilson gets covered in manure across the three films) and it never feels stale or lazy. There’s a knowing, tongue-in-cheek quality to the storytelling in the Back to the Future films that just further adds to the wacky and playful tone of the entire trilogy.

The first Back to the Future is, undoubtedly, the most well-remembered film in the series, but Back to the Future Part II and Part III are both undeniably fun sci-fi romps in their own right. Part II’s vision of the future is still a wacky and enjoyable visual creation (who didn’t want a pink hoverboard after seeing this film?), and Part III, to its credit, has a lot of fun with its Western setting (Marty going by “Clint Eastwood” in the 1880s is a nice bit of meta-humor).

But what ultimately makes the Back to the Future trilogy so memorable and easy to love is that it never takes itself too seriously. It never gets too caught up in time travel mechanics or exposition (well, except for that iconic chalkboard scene in Part II). Instead, all three movies remain focused on the likable pair at the center of it all: Marty and Doc. The saga ultimately gives both characters the happy endings they deserve and does so in ways that’s both silly and earned.

Separately, the three films are delightfully fun sci-fi adventures. But combined, they make up one of the most cohesive and well-made trilogies ever. Watch them now, before Marty changes history again and they disappear from Netflix forever.

The Back to the Future trilogy is available to stream now on Netflix in the U.S.