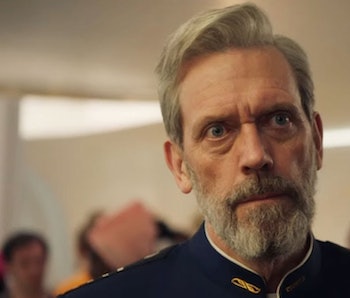 HBO announced on Thursday that the maiden voyage of Avenue 5 will continue for another season. But in confirming that the genre-defying sci-fi comedy from Armando Iannucci (Veep, The Death of Stalin) will return, the network may have inadvertently revealed a major spoiler about how Season 1 will end.

The plot of Avenue 5 hinges on the idea that a space cruise set 40 years in the future and originally planned to last just a few months could be extended to a few-years' trip around the galaxy due to a slight malfunction. For the first few episodes, much of the comedy comes from the crew's attempts to keep that secret (and others) from the ship's paying customers.

At the same time, the exact length of the trip keeps changing. First, it's years, then it's weeks, then it's years and weeks. Heading into Episode 5, we're pretty much expecting this voyage to go on indefinitely, though based on the past few episodes those calculations could change at any moment.

That's the beauty of setting a show on a giant spaceship cruise, the audience has no idea if the science checks out. (It actually does a decent amount of the time.)

The point is, until the announcement of Avenue 5 Season 2, it was entirely possible that the ship would make it back to Earth in a reasonable amount of time. It wasn't likely, but it was possible.

But with an Avenue 5 Season 2 release date confirmed, you can rule out any hope that this cruise from hell will course-correct by the end of Season 1. If anything, the estimated length of the voyage will only get longer, giving HBO an unlimited runway to play out this hilariously twisted sci-fi concept.

“It was so great to be back again with HBO for the first season of Avenue 5, so I’m doubly thrilled that HBO have now seen fit to put Captain Ryan Clark and his passengers and crew through even more physical and emotional hell next year too,” Iannucci said in an official statement (via Deadline).

There you have it, even Iannucci himself confirms that life is only going to get worse for the characters of Avenue 5. And given how entertaining these first four episodes have been, we wouldn't have it any other way.