"How much for the ring?" 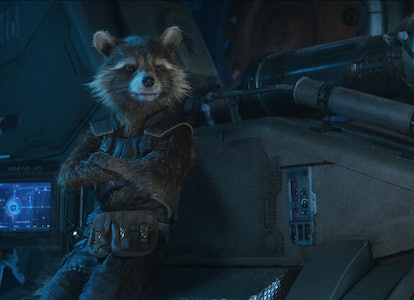 What a sight this would have been. The climax of Avengers: Endgame is, without a doubt, the biggest action scene in the entire history of the Marvel Cinematic Universe. The sequence saw (almost) every MCU hero facing off against Thanos and his army for control of the Infinity Gauntlet, and as a result, the battle was filled with unexpected team-ups between Earth's mightiest heroes. But it turns out there were even more cool mini-crossover moments that never made it into the film.

An unused storyboard sequence from Avengers: Endgame popped up online this week, featuring a brief (but explosive) team-up between two surprising heroes: Rocket Raccoon and Wong. The sequence shows Rocket using Wong’s magic portals to spread one powerful energy blast over a massive area — wiping out an entire legion of Thanos’ henchmen in one fell swoop. The scene ends on a fun final note, with Rocket predictably trying to haggle for Wong’s magic ring. Check out the storyboarded sequence for yourself below:

Despite playing a pretty big role in both Infinity War and Endgame, Rocket is one of the few remaining MCU characters that has had very little screen interaction with Doctor Strange and his fellow sorcerers. Rocket and Groot were partnered up with Thor for much of Infinity War and only joined the other Avengers on Earth near the end of the film, while Strange was in space fighting Thanos with Tony, Peter, and the other Guardians. Strange and Wong were both blipped when Thanos snapped his fingers in Infinity War as well, which meant they were absent for nearly all of Endgame.

But while it would have been very cool to see this collaboration between Wong and Rocket happen on the big screen, it’s easy to understand why the Russo Brothers chose not to include it. The climax of Endgame is already overflowing with dozens of characters and loads of CGI action. So it makes sense why the filmmakers might have wanted to avoid cutting between different duos and team-ups too much. (The same thing happened in a nixed scene where Ant-Man throws the Hulk while the Hulk throws Spider-Man.)

Moving forward, Rocket will, presumably, be one of the Guardians of the Galaxy appearing in Thor: Love and Thunder, which means there may be even more fun banter between Rocket and Chris Hemsworth’s Thor in store for fans. Similarly, many presume that Wong will be returning to the MCU in the Sam Raimi-directed Doctor Strange in the Multiverse of Madness, though, it’s unclear how large of a role he’ll have.

The Inverse Analysis — Given just how many times the MCU has brought its heroes together in battle (either as allies or foes), one can only imagine all the hypothetical team-ups that were left on the cutting room floor over the years. Marvel no doubt has dozens more planned for their upcoming Phase 4 films as well. Whether or not any of them will feature Rocket or Wong is a mystery for now, but it seems like a pretty likely possibility. If they’re lucky, fans may even get to actually see the two team up in live-action form in the next Avengers film.