I Am Iron Man

“Maybe I missed it.” 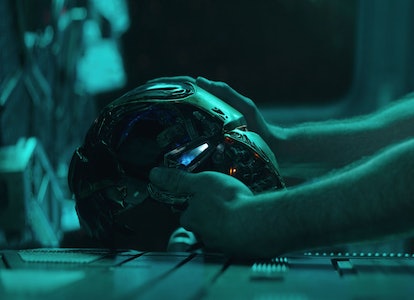 When it comes to the Marvel Cinematic Universe, a franchise full of big, epic moments and soap opera dramatics, it's easy to forget that movies like Avengers: Endgame are still movies. It's a visual medium that can tell a story in a way mere words cannot.

Which is why even now, nearly two years after its release, fans on Reddit are picking up visual foreshadows in Avengers: Endgame that our raw emotions maybe blinded us to. In this case, it was the death of Tony Stark, teased by his... helmet?

What Happened? — On January 4, a Reddit user named (fittingly) u/IronManMkXLVI shared on r/marvelstudios a visual foreshadow of the death of Tony Stark, played by Robert Downey Jr. u/IronManMkXLVI pointed out that Stark's broken helmet, which Stark uses to record a message to Pepper Pots in the ship with Nebula, is scarred on its right side. The visual mirrors the severe burns on Tony Stark's face after his brutal fight with Thanos.

"Maybe I missed it, but has no one pointed out this foreshadowing?" wrote u/IronManMkXLVI. "The helmet was damaged differently in [Infinity War], but it changed to reflect Tony’s final moments in Endgame. Fine on the left side, damaged on right."

Scroll down in the comments, and you'll find Marvel fans argue over what counts as a "helmet." But that's not important. What's important is that u/IronManMkXLVI picked up a clear visual foreshadow that many fans haven't publicly talked about, at least not in a way that ends up a viral "Did you know?" meme your friends share on Facebook. Consider this a newly "discovered" piece of the movie.

Remember Gus Fring? — Potential spoilers if you haven't seen the TV show Breaking Bad yet. (It's been streaming on Netflix forever. What are you waiting for?) But a similar visual to Tony Stark in Endgame was famously used in the acclaimed television show Breaking Bad, which foreshadowed the death of Gus Fring (Giancarlo Esposito) with facial scarring.

Since the start of the show's second season, a recurring image of a half-burned teddy bear with a missing eye (originating from a plane crash Walter White accidentally caused) haunted viewers until, at the end of Season 4, they finally learned why: It was how Gus Fring was going to die.

There's no direct connection to this and Avengers: Endgame, which is a wildly different story with wildly different themes. But for budding cinema studies students, it's a succinct lesson in visual storytelling that isn't distracting or too obvious.

A missing Easter egg? — It's probably important to mention that this isn't an Easter egg. Easter eggs are, or at least should be, cute, subtle references to existing mythology or trivia. What this is is classic filmmaking. Directors Joe and Anthony Russo (as well as the countless other professionals behind the camera) intended to foreshadow Tony Stark's death right at the beginning of the film. By using Tony Stark's irremovable identity as Iron Man, the foreshadow deepens the significance of Iron Man's sacrifice. It's smart, it's clever, and like Babe Ruth pointing his slugger up to the skies in the Bronx, it's the movie calling its shot.

And all the while, none of us were that wise. (At the same time, Downey Jr.'s perfect "I am Iron Man" line in Endgame, which ties back to the beginning of the MCU in 2008's Iron Man, was improvised on the spot. So who knows how much any of this is planned ahead.)

The Inverse Analysis — The subtlety of this Avengers: Endgame foreshadow is remarkable. This one definitely flew past even the hardest of hardcore fans. I just think it's neat to be learning something new about our favorite movies, even now.