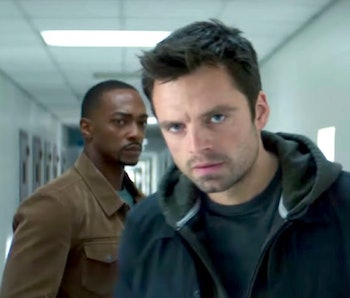 The Falcon and the Winter Soldier remains in delay limbo on Disney+, leaving all the more time for fans to speculate and theorize about the show's story ahead of its eventual release date. The cast has a good number of actors announced, but only a handful of characters. Thankfully, Charles Murphy of Murphy's Multiverse has a compelling idea for a comics villain who could face off against Bucky and Sam — and potentially challenge Earth's Mightiest Heroes on the big screen.

Murphy's guess draws upon quite a bit of background information: the one confirmed Falcon and Winter Soldier role we know about is Wyatt Russell as John Walker, otherwise known as U.S. Agent. This character seemingly ties the series to one particular era of Captain America comics, helmed by Mark Gruenwald.

If Gruenwald's ten-year run on the comics from 1985 to 1995 is indeed the inspiration for this series, there's one glaring absence from the cast speculation. Power Broker was a mysterious villain connected to an extremely powerful conglomerate known only as The Corporation. Also known as Curtiss Jackson, his abilities were not as much super, but manipulative.

Power Broker was in the business of augmentation, namely, giving mere mortals superpowers for the right price. Unfortunately, it wasn't an exact science, and often these creations backfire. Considering how The Falcon and the Winter Soldier will likely result in the creation of a new Captain America, the topic of giving someone superpowers through a procedure seems apt, so it would be a wasted opportunity to not use a fearsome corporate villain.

However, there is some evidence that he won't make an appearance. No new names apart from John Walker's have been revealed, and the returning names are plentiful, from Peggy Carter's great-niece Sharon Carter to General Zemo himself. There might not be a need for yet another villain, but perhaps there could be greater aspirations in mind for Curtiss Jackson.

If The Falcon and the Winter Soldier introduces this character and the shady Corporation behind him, it could pose a monolithic enemy for the Avengers, one with purely business intentions. The Corporation is organized crime at its most organized, and Power Broker himself is the CEO of their Western division. This kind of villain isn't the first guy you'd think of for the next major Avengers baddie, but perhaps it's for that very reason why he should be the newest antagonist.