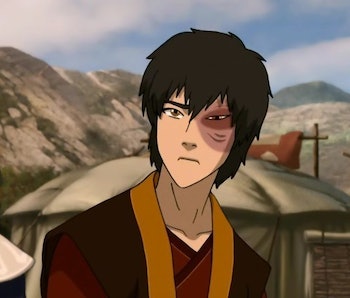 Avatar: The Last Airbender held nothing back when portraying the Fire Nation's violence. They were ruthless towards the other three nations, and, in the case of the ruling Fire Nation family, terrible to each other. Prince Zuko was physically scarred by his own father, Fire Lord Ozai, and banished from the Fire Nation for showing weakness. Or so we thought. An intriguing new theory explains that Ozai may have had another reason for sending Zuko away and it could explain a long-running mystery in Avatar: The Last Airbender.

In Season 1 of The Last Airbender, we learn Zuko was banished from the Fire Nation because of his insolence. After publicly speaking out against a general’s plans in a war meeting, Fire Lord Ozai challenged his son Zuko to Agni Kai, a traditional Fire Nation duel. When Zuko refused to fight his father, Ozai was furious and perceived his son’s actions as disrespectful. As punishment, Ozai permanently burned Zuko’s face, stripped him of his honor, and sent him away for good. (Unless he could capture the missing Avatar.)

The real reason for banishment?

But did the Fire Lord really banish his only son just for mouthing off to a general? Reddit user neilader argues that “the real reason Ozai banished Zuko was so that Azula could take his place as heir to the throne.”

According to the theory, Ozai had always planned to get rid of Zuko in one way or another so his evil and more powerful sister Azula could become Ozai's successor. That's why Ozai faced his son during Agni Kai instead of the general Zuko disrespected. Whatever Zuko might have done, his punishment was never going to fit the crime. What’s more, Zuko’s exile also sent away Iroh (the rightful Fire Lord) killing two birds with one stone, just as Ozai presumably intended all along.

The Avatar: The Last Airbender comics fill in some of the gaps to strengthen this theory. In The Search Part Two, Zuko looks for answers about his mother, who mysteriously disappeared at around the same time Ozai became Fire Lord. In the show, it's hinted in a flashback that the previous Fire Lord, Azulon, ordered Ozai to kill a young Zuko as punishment for conspiring against Iroh. The next morning, Azulon is dead, Ozai is Fire Lord, and Zuko's mom is gone. It's never clear how these things all connect.

However, the comics reveal that Ozai really was going to kill Zuko on his own father's order. But, Zuko's mother Ursa convinced him not to, exchanging Zuko’s life with a poison Ozai used to kill his own father and claim the thrown. Afterward, Ursa went into hiding and changed her appearance permanently.

How old is Zuko?

The Fire Nation prince was only 13-years-old when he spoke out against the general and faced his father in Agni Kai. At the time, Zuko believed himself ready to be included in major decisions and it was only because he pestered his uncle Iroh that he was allowed into the war council to begin with. At that tender an age, the incident was surely traumatizing to Zuko, who spent the next two years working to find and kill Aang so as to appease his abusive father. That means Zuko was 15-years-old when The Last Airbender began airing.

With all the information we have, this theory makes a lot of sense. Ozai clearly favored his daughter Azula. Agni Kai wasn't his first opportunity to get rid of Zuko, but when it arrived, he took advantage of it with the ruthless ferocity we should expect from a Fire Lord.

Despite their family ties, Ozai’s treatment of Zuko is disturbing. It’s possible the contentious father-son relationship was never going to get better because Ozai always had it out for Zuko. Whether it’s for the reasons previously stated or not, Ozai had a vision of the future and Zuko was very obviously not a part of it — regardless of which general he spoke against.

The Inverse Analysis — This theory might also reveal a lot about Azula's character. Seizing upon her father's contempt for Zuko, she constantly teased her brother and set him up to fail. That's why she tells the Fire Lord that Zuko killed Avatar Aang in Season 2 of The Last Airbender, even when it was technically her and she also doesn't know for certain that Aang is really dead.

Perhaps Azula was functioning under the impression that Ozai would never crown Zuko no matter what he did to regain his honor, which explains her arrogance throughout the series. If Azula knew Ozai wanted her to rule no matter what, nothing she could say or do would change that. Granted, Azula and Ozai only interacted a few times onscreen in The Last Airbender. However, even when Azula acted out or spoke out of turn in front of Ozai, her admonishment was minuscule when compared to Zuko’s infamous punishment.