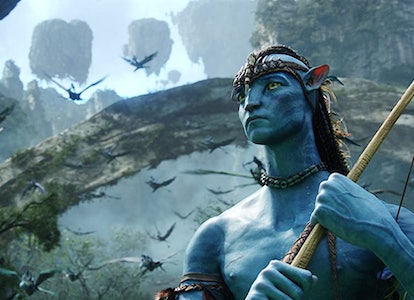 Avatar may have shaken the box office more than a decade ago, but its legacy quickly went from “biggest movie in the history of the world” to “mostly forgotten pop culture phenomenon.” But with the release of the sequel only a few days away, we’re realizing that’s not even close to the truth. In a recent episode of the HBO documentary series How To With John Wilson, for example, we see a meetup of die-hard Avatar fans who can even speak fluent Na’vi.

But the greatest evidence for Avatar’s cultural relevance is a skit that highlighted why it’s so infuriating, yet so timeless.

In October 2017, Gosling’s episode of Saturday Night Live included “Papyrus,” a sketch where he’s slowly driven crazy after realizing the title font for Avatar was Papyrus, a default “tribal, yet futuristic” font that anyone who’s used Microsoft Word is familiar with. “He just highlighted ‘Avatar,’ clicked the drop-down menu and he randomly selected Papyrus,” he vents to his therapist (Kate McKinnon), who has to break the news that there are more Avatar movies on the way.

Papyrus’ odd inclusion in the Avatar branding goes further than just the title: When the Na’vi speak their native language, the subtitles appear in the font. It’s a strange quirk that could only happen in a 2009 movie, but somehow, the memory has lasted. It might be an odd way to continue the Avatar conversation, but at least it is continuing it.

Papyrus shows that some movies may not age well, but can still stick in your mind years after their release. Nobody thinks about the terrible “no gang signs” opening scene of Iron Man or the horrifically ill-advised “Hallelujah” sex scene in Watchmen (except put-upon pop culture writers), even though both films came out around the same time. Flaws happen, and Avatar was so huge that even one of its dumbest issues became a cultural touchstone.

Avatar producer Jon Landau thinks cultural artifacts like “Papyrus” prove that Avatar isn’t back — it never went away. “If there’s [people] talking about it, there’s a cultural footprint,” he told Inverse. “We wouldn’t be talking about it [if it wasn’t]. Ryan Gosling wouldn’t be on Saturday Night Live making fun of the papyrus font. The haters wouldn’t be online on the Avatar website or social channels, talking about ‘Oh, this movie is irrelevant.’ Well, why are you there?”

And just like Avatar left its mark on culture, this sketch left its mark on Avatar. A year after it aired, Avatar released a new logo that brought the franchise into the new decade. It was a bit bolder, more distinct, and bright blue. It still had the remnants of Papyrus’s yoga studio branding, but it was obvious there was thought put into it.

The wrong font choice can change the conversation around what should be a historic moment. Just ask the Cleveland Cavaliers, who announced Lebron James’ departure with an open letter written in Comic Sans. Or look at CERN, who changed everything we know about matter with the discovery of the Higgs Boson, only to present their findings in the same maligned font.

But in the case of Avatar, the font discussion didn’t change the movie’s reputation. If anything, it continued it, revitalizing the conversation around the franchise just when it needed it most. Papyrus is now known as “the Avatar font,” but that’s better than Avatar being known as “the Papyrus movie.” If it can shed that moniker, then it’s here to stay.

Avatar: The Way of Water premieres in theaters December 16, 2022.

More like this
Entertainment
Jan. 28, 2023
Where and how to watch the 2023 Oscar nominees
By Mónica Marie Zorrilla
Science
Jan. 28, 2023
The best mystery thriller on Netflix ignores a basic fact about hydrogen energy
By Tara Yarlagadda
Culture
Feb. 2, 2023
After Harry Potter, Daniel Radcliffe Obviously Had to Play a Farting Corpse
By Alex Welch
LEARN SOMETHING NEW EVERY DAY.
Related Tags
Share: