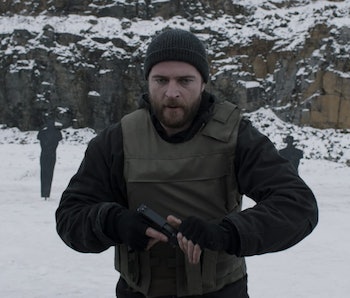 This article about the film Atlantis was originally published on January 5, 2021 and updated on January 2, 2022 following the movie’s release. Read on for the original article, with some new changes to reflect the latest updates on this topic.

Ukraine went for an Oscar, and it’s doing it with a science fiction movie. Opening in the U.S. via a digital run with New York’s Metrograph Theatre, Valentyn Vasyanovych’s politically-charged sci-fi Atlantis was Ukraine’s submission for the Best Foreign Film Oscar in 2021’s Academy Awards ceremony.

Here’s everything we know about Atlantis, and from release date to plot to how you can see this buzzy sci-fi movie for yourself.

What is the release date of Atlantis?

How can I watch Atlantis?

Atlantis was acquired for distribution in the U.S. by Grasshopper Film. It is only available online via rental from Apple TV.

Atlantis is a post-apocalyptic science fiction film by director Valentyn Vasyanovych and his fourth scripted narrative movie. It first premiered on September 4, 2019, at the Venice International Film Festival. At Venice, the movie was awarded Best Film by the judges of the Horizons section, which gave the movie buzz throughout 2020.

What did critics have to say about Atlantis?

Atlantis currently has an impressive 97% on Rotten Tomatoes, thanks to reviews from Variety, The Hollywood Reporter, and others.

What is the plot and story of Atlantis?

Set in near-future Ukraine after a devastating war with Russia, Sergey (Andrii Rymaruk) is a former soldier suffering from post-traumatic stress disorder who takes on a job exhuming corpses. His life changes when he meets Katya (Liudmyla Bileka), an archaeologist, and the two embark on quite literally digging up the past.

A summary provided by the Metrograph Theatre is as follows:

Eastern Ukraine, 2025. A desert unsuitable for human habitation. Water is a dear commodity brought by trucks. A wall is being built on the border. Sergiy, a former soldier having trouble adapting to his new reality, meets Katya while she’s on a humanitarian mission dedicated to exhuming the past. Together, they try to return to some sort of normal life in which they are also allowed to fall in love again. A prizewinner at the Venice Film Festival and Ukraine’s official selection for the 2021 Academy Awards, Atlantis is a gorgeous and visionary sci-fi drama.

Where can I watch the trailer for Atlantis?

You can watch the trailer in the Vimeo embed below.

Was Atlantis nominated for any Academy Awards?

In 2020, Atlantis made a push to get an Oscar nomination. It’s only the thirteenth Ukranian film to submit itself for Academy Award consideration. Unfortunately, it was passed over for the Best Foreign Film Oscar.

This article was originally published on Jan. 5, 2021