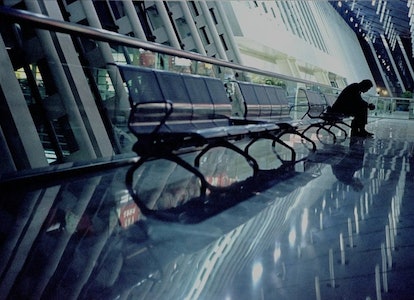 Six months before the release of Eternal Sunshine of the Spotless Mind, another captivating sci-fi romance told the story of two people who attempt to erase their own memories after a painful breakup. But unlike Michelle Gondry’s instant classic, Michael Winterbottom’s Code 46 did not go on to become one of the most acclaimed movies of all time.

Instead, it’s unjustly languished in semi-obscurity, an odd outlier in the prolific Winterbottom’s filmography. Best known these days for his multiple comedic collaborations with actor Steve Coogan (Tristram Shandy: A Cock and Bull Story, Greed, The Trip series, etc), Winterbottom has tackled nearly every genre in a long and varied career, but Code 46 remains his only venture into sci-fi.

It’s not whimsical or quirky like Eternal Sunshine — at times its central romance even seems cold or aloof — but there’s a powerful, hypnotic pull to Code 46. If you haven’t seen this movie, it’s not too late. You can watch it now on HBO Max.

Code 46 takes place in a vaguely dystopian future where genetic engineering and cloning have become prevalent that potential sexual partners must take DNA tests to make sure they’re not biologically related. Winterbottom and screenwriter Frank Cottrell Boyce (in their fifth film together) open the movie with onscreen text explaining the regulation that gives the movie its title, prohibiting people with shared genetics from reproducing. But otherwise they keep exposition to minimum, and plenty of details about the movie’s world are clear only from context clues (or never explained at all).

This gives Code 46 a dreamlike quality, and the connection between the main characters is fueled by a dream that Maria Gonzalez (Samantha Morton) has every year on her birthday. Maria lives in Shanghai and works for the Sphinx, a Big Brother-esque organization that provides documents referred to as “papels,” which allow people to move freely around the world. William Geld (Tim Robbins) travels from Seattle to Shanghai to investigate the illegal smuggling of papels out of the local Sphinx office, and he’s instantly drawn to Maria — even though he also instantly knows that she’s the person selling papels on the black market.

William possesses a sort of preternatural intuition that makes him an ideal insurance investigator. He’s also taken an “empathy virus,” which gives him perfect insight into people based on a single personal detail. But the connection between William and Maria is more than the byproduct of a designer virus (in this world, “viruses” offer everything from language fluency to singing ability). As Maria narrates, there is something primal yet ethereal pushing them together, leading the couple to disregard the accepted customs of their highly regulated society, and even their own personal safety. “I was never scared of you, even when I should’ve been,” she says in her melancholy voiceover.

William and Maria spend a single romantic night together, which carries devastating consequences for both of them. Neither Robbins nor Morton is a traditional romantic lead, and they make for an unlikely couple. But their attraction feels genuine, and although much of the movie is icy and calculating, the love scenes between William and Maria are sensual and passionate. Robbins and Morton convey the overwhelming desire of their characters, who live in an environment where such feelings are repressed and abstracted, reduced to DNA tests approved by lab technicians.

It’s an environment that’s both alien and easily recognizable, and Winterbottom uses select bits of sci-fi technology (handheld video communicators that look like early smartphones, photo albums that play a person’s memories) to augment a setting that mostly resembles contemporary reality. The movie takes place in Shanghai, Seattle, and Jebel Ali (in the United Arab Emirates), but Winterbottom freely combines locations (he shot in Shanghai, London, Hong Kong, Dubai, and Rajasthan) to create a mismatched landscape that matches the polyglot language his characters speak.

The dialogue throws words from various languages into its future concept of English, and the distinctions among cultures and nations appear to have blurred. There’s no mention of any national governments, and what William needs to travel back and forth between Seattle and Shanghai isn’t a passport but “cover,” the insurance authorization provided by a papel. In an eerie parallel to the possible forthcoming necessity of vaccination passes, Maria sells a papel to a man who can’t get travel authorization because he isn’t immune to a virus prevalent in his destination. He dies of the disease when he goes there anyway.

But Code 46 isn’t the kind of sci-fi movie that’s interested in predicting the future, or even in making sharp social commentary about the present. Winterbottom also made a number of political documentaries (The Road to Guantanamo, The Shock Doctrine). Here, he’s more focused on mood and atmosphere, on the feelings that overwhelm William and Maria both despite and because of the society they’ve been raised in. The third act provides a twist in their star-crossed romance that explains the relevance of the title, but it’s less about surprising the audience with an unexpected reveal than about deepening the tragedy of this doomed pairing.

Although their genetics don’t determine their fate (as an attendant at a DNA testing facility tells William, there are myriad other factors that distinguish even biological clones from one another), William and Maria are nevertheless destined for heartbreak the moment they spot each other in the Sphinx lobby in Shanghai. They are suddenly, inexorably drawn together, and then just as arbitrarily torn apart, subject to the caprices of a society more concerned with codes than emotions. Winterbottom captures that brief moment when they find intimacy and a measure of happiness despite those codes that are designed to keep them apart.

Code 46 is streaming on HBO Max now in the U.S.

More like this
Entertainment
11 hours ago
Everything we know about Dune: Part Two
By Gabrielle Bondi and Ryan Britt
Culture
21 hours ago
8 sensational sci-fi shows and movies coming to HBO Max in July 2022
By Robin Bea
Entertainment
6.19.2022 11:30 AM
You need to watch the best monster thriller of the '90s before it leaves HBO Max next week
By Mónica Marie Zorrilla
Related Tags
Share: