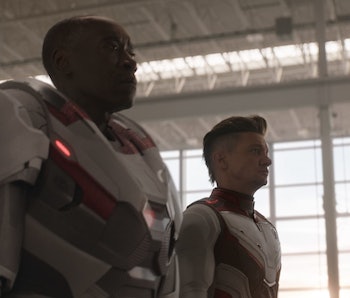 Long before the Marvel Cinematic Universe became a behemoth multimedia empire, the comic book Avengers characters led the franchise charge themselves. In 1984, the New York-based cadre of superheroes licensed out the business of saving the world on the West Coast to a California off-shoot known, fittingly, as the West Coast Avengers.

In 2021, the West Coast Avengers storyline could offer up a fresh batch of films from the MCU — if you believe the latest rumors. But based on their comic book history, this probably won’t be the Avengers 5 team-up you might expect. Instead, the advent of a spinoff superhero team could give the MCU a chance to replicate one of the smartest moves the comics ever pulled off.

On September 20, the anonymous but popular Marvel leaker Main Middle Man (@MainMiddleMan on Twitter) hinted at a twist in the mysterious upcoming Disney+ series Armor Wars (which still has no firm release date).

In a series of tweets, Main Middle Man says the series will focus on Don Cheadle’s character Rhodey and the Stark's family in the aftermath of Tony Stark’s death in Avengers: Endgame.

The leaker also says Armor Wars will set up the formation of the West Coast Avengers, with Vision supposedly playing a leading role.

“There will be an initial formation of the West Coast Avengers,” writes Main Middle Man.

They continued, “Vision and other familiar faces are expected to make an appearance. From everything I have heard, it will be a very intense and immersive series, along the lines of the MCU, and will feature Zeke Stane.”

Main Middle Man, whose Twitter account was registered in September 2020, is a known figure among Marvel fans for their often spot-on “leaks.” In the past, the unknown leaker has revealed accurate plot details for MCU shows like WandaVision (for example, a tweet from December 2020 about Evan Peters’ role in the series) and the release date for the Hawkeye trailer. A comprehensive record of Main Middle Man’s accurate leaks can be found on Reddit. This may yet be one to add to the list.

Aside from the tweets about Armor Wars, it’s safe to say that the West Coast Avengers are probably on their way to the MCU. After all, the MCU has spent most of Phase Four setting the heroes’ arrival up.

Who are the West Coast Avengers?

The West Coast Avengers (alternatively, Avengers West Coast) was created by Roger Stern and Bob Hall in 1984. In the comics, Vision and Hawkeye decide to expand the Avengers beyond New York as a way to be more efficient in their response to new threats across the hemisphere.

The initial West Coast team is made up of Hawkeye, Hawkeye’s then-wife Mockingbird, Wonder Man, Tigra, and Iron Man (Rhodey wearing Tony’s armor). The series was supposed to run for just four issues, but it far outlived those initial plans. The comic West Coast Avengers ran for nearly ten years, from October 1985 to January 1994.

The name “West Coast Avengers” makes the comics sound tubular, bro, but the real driving force of the team (and the comic-book series they star in) is redemption. In a 2021 feature story by Newsarama, comic-book writers Christos Gage and Sam Humphries comment on the significance of the West Coast Avengers and their unrecognized legacy in the Marvel Universe.

“The West Coast Avengers was sort of the ‘damaged’ Avengers... they all have checkered pasts and/or ongoing issues,” Gage tells Newsarama. “There was a real feeling that they were trying to work things out and attain some kind of redemption.”

“West Coast Avengers was the first expansion of the Avengers. The multiple Avengers books we have now started there,” Gage says. “I think that is the title’s legacy ... that the Avengers could be not just a team, but a franchise.”

Comic-book writer Sam Humphries observes that the primary, East Coast-based Avengers comic also evolved to encompass more heroes from the Marvel Universe, thanks to the work of writers like John Byrne and Brian Michael Bendis.

“With a scope like that, the concept of a second, separate team four hours away by commercial airplane seems quaint, doesn’t it?" Humphries points out.

Still, West Coast Avengers wasn’t just a product of its time as a watershed moment introducing the idea of giving more space for heroes whose stories couldn’t all fit into a single Avengers comic series.

The Inverse Analysis — Even if there is a confirmed leaker dishing out juicy spoilers, it’s always wise to take all rumors with a healthy dose of skepticism. Even getting Kevin Feige to go up on stage and announce something isn’t enough for that thing to happen (remember Inhumans?). Still, if the West Coast Avengers are coming to the MCU, it’s fitting that, just like in the comics, they’ll go where they can to have their own spotlight away from the other Avengers.