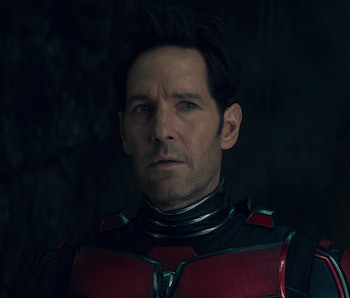 With Paul Rudd’s charms and a comic tone that evoked films like Ocean’s Eleven, it’s always been easy to dismiss Ant-Man as one of the lesser important Avengers in the Marvel Cinematic Universe.

But with the imminent arrival of the big bad Kang the Conqueror, played by Jonathan Majors, Marvel Studios is going the distance in making sure fans don’t skip out on Ant-Man and the Wasp: Quantumania in Feburary 2023.

At CCXP in Brazil on Thursday, Marvel Studios premiered a new trailer for Ant-Man and the Wasp: Quantumania to the delight of Brazilian fans in attendance.

The trailer doesn’t feature anything too new. In fact, it’s better to describe it as a montage of Ant-Man throughout the MCU, starting with his 2015 film and through Captain America: Civil War, Ant-Man and the Wasp, and of course, Avengers: Endgame. The “trailer” also has a few scenes from Quantumania that were already previewed at Comic-Con in San Diego.

The most compelling thing about the new trailer, however, is its tone. More operatic and somber than fans are used to with Ant-Man, the trailer posits Ant-Man is one of, if not the most important figure in the MCU. It sternly reminds us it was Ant-Man and his access to the Quantum Realm that let all of Avengers: Endgame happen. Without Scott Lang, the Avengers couldn’t obtain the Infinity Stones, defeat Thanos, and bring back all who “blipped.” It ends with a lengthy look at Quantumania, where Kang belittles Ant-Man for being out of his league.

You can watch the “Legacy of Ant-Man” trailer below.

Ant-Man and the Wasp: Quantumania, director Peyton Reed’s third outing in the series with leads Paul Rudd and Evangeline Lilly, will pick up with Scott Lang (Rudd) enjoying celebrity fame after Endgame. But when his now young adult daughter Cassie, played by Kathryn Newton, gets herself sucked into the Quantum Realm, Scott chases after her only to encounter the threatening alien immortal, Kang the Conqueror.

Kang is primed to be the next major villain of the MCU after Thanos. He will be the main antagonist of the 2025 film Avengers: The Kang Dynasty, and perhaps Avengers: Secret Wars, which opens the year after. With such importance to the future of the MCU, it’s clear that Marvel is hoping fans don’t sleep on Ant-Man and the Wasp: Quantumania just because Ant-Man’s movies haven’t been the event releases like other Marvel epics.

The CCXP preview isn’t the only time Marvel has promoted Ant-Man with weighted gravity. The first look at the movie happened at San Diego Comic-Con in July, which had similar grave tones that indicates Quantumania won’t be like other Ant-Man movies. Even the poster, which has long been a gag in the series with Ant-Man and the Wasp being puny against a white backdrop, now places them in a vulnerable position in Kang’s oversized hands.

This isn’t to say Quantumania will be all dark and grim. It still has Paul Rudd hanging out at Baskin-Robbins, and there’s plenty of potential for father-daughter centric comedy; with the delightful Kathryn Newton (who was a gas in the 2020 horror film Freaky) as Rudd’s co-star, Quantumania is sure to engineer a few howls. Just don’t forget that Kang is bigger than Ant-Man.

Ant-Man and the Wasp: Quantumania will open in theaters on February 17, 2023.