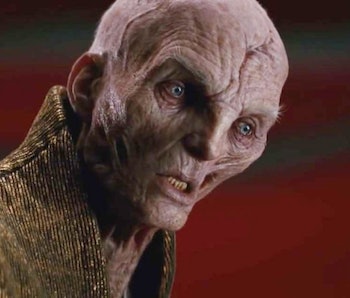 The present of Star Wars might be its past, but the future of Star Wars is its future. Or, in plainer English, while our current Star Wars show, Andor, might be classified as a prequel, the franchise is carving out new territory with plans for a movie set after the events of The Rise of Skywalker.

But as one incredible Andor cameo confirms, exploring the next era of the Star Wars timeline isn’t as simple as you might think.

Spoilers ahead for Andor Episode 8.

In Andor Episode 8, we follow Cassian to an Imperial prison/factory where criminals are forced to build parts for the Empire. It’s unclear what exactly they’re building, but one thing is clear: Cassian Andor’s new boss is none other than Andy Serkis.

The actor best known for motion-capture roles like Gollum and Supreme Leader Snoke appears here in live-action. Serkis plays a prisoner who’s been promoted to floor manager. He oversees several dozen prisoners with a mix of encouragement and cruelty. (Top performers get “flavor” mixed into their daily food, while the bottom tier gets punished with physical pain.)

There’s a lot to say about these scenes, which deftly explore the subtle cruelty of the Empire. We see how the prison-industrial complex treats prisoners as disposable labor. We also see how little the rest of the galaxy cares about these people.

But it’s worth taking a closer look at Andy Serkis’ character, in particular. Especially when compared to his previous Star Wars role as Snoke, the primary villain of Star Wars Episodes VII and VIII.

Snoke was an intriguing villain at first, but by the time we reached the end of the sequels trilogy, we’d pretty much lost all interest. His backstory was a mess and his motivations were just as murky. Despite starting off as a cunning villain with impressive Force powers, he wasn’t all that memorable in the end.

The same goes for most of the cast of those movies. While characters like Rey, Kylo Ren, and Finn were all exciting at first, the trilogy’s clear lack of direction meant all that potential was totally squandered. With Lucasfilm apparently set to bring back some sequels characters for a new movie from Damon Lindelof, we can’t help but worry if revisiting that cast is a huge mistake.

This Andy Serkis cameo only increases those concerns. If Andor can get more out of Serkis in 50 minutes than the sequels did in three full movies, then why bother revisiting those characters at all?

It’s becoming increasingly clear that the most interesting Star Wars characters have nothing to do with the mainline movies. Hopefully, Lucasfilm keeps that in mind as it pivots back to the big screen with its first Star Wars movie since Rise of the Skywalker.