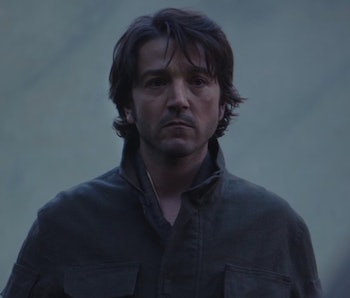 Could Mara Jade finally return to Star Wars canon? While the slow-burn of Andor doesn’t exactly lend itself to these kinds of outlandish theories, Episode 5 dropped a compelling Easter egg that just might bring one of Palpatine’s secret projects back into the fold. Here’s what Cassian and Skeen may or may not know about “The Emperor’s Hand.” Spoilers ahead.

While much of the plot of Andor Episode 5 focused on Cassian’s uneasy relationship with the other Rebels on the planet Aldhani, one particular moment seemed to contain an Easter egg with almost no context. While going through Cassian’s stuff, Skeen (Ebon Moss-Bachrach) mentions that he’s aware that Cassian recognizes his tattoos, even if the rest of the crew, doesn’t. According to Cassian, the two tattoos read “Krayt’s Head” and “By the Hand.”

The implication of their conversation is that only Cassian can read this specific type of writing and that the references are hidden from the others. But what does it mean?

The writing itself might hold a clue. Although Aurebesh is the standard Star Wars alphabet, it’s obviously not the only written language in the galaxy. If the writing in Skeen’s tattoos is ancient, or part of some kind of criminal syndicate, we could be dealing with all sorts of interesting backstories for both of them. Cassian mentions he was involved with all of this at “16,” which means he was in the same kind of club Skeen was at that age — right?

And because Cassian has previously said he was forced to fight for the Empire when he was 16, it seems likely this is what he and Skeen are talking about: compulsory imperial service.

But what sort of organization was “Krayt’s Head”? We know that’s a vague reference to a Krayt Dragon, a giant lizard monster that lives on Tatooine. But what does “By the Hand” mean?

Although it’s not outright confirmed, it’s possible that “by the hand” refers to an elite group of secret operatives who worked directly for Palpatine called “the Emperor’s hand.” In Legends/Expanded Universe canon, Mara Jade — eventual wife of Luke Skywalker — was “the Emperor’s hand.” But, after Disney de-canonized the EU in 2014, a different in-canon version of the Emperor’s Hand later emerged in Rebels.

In the Rebels episode “Legacy of Mandalore,” we learned that these secret operatives exist in current canon, too, and they are also collectively, called “the Emperor’s Hand.”

So here’s the dot-connecting. We know Cassian had some kind of Imperial service in the past, on the planet Mimban. That’s likely what he and Skeen are connecting about. However, Cassian may not know what “By the Hand” means, even if he can read the writing. If Skeen is a former member of the Emperor’s Hand, the implications could be much bigger than they seem.

Because if Andor is bringing a former Emperor’s Hand operative into a major storyline, who’s to say that other members of the same group aren’t still out there? If Mara Jade ever becomes canon again, having her appear in Andor would be amazing. After all, if she was canon again, at this point in the timeline, she’d still be working directly for Palpatine.