“I'll always work with these people” 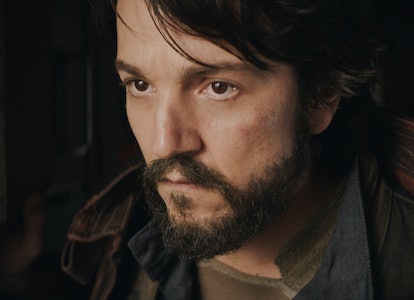 Diego Luna is the beating heart of Andor. Not only is he playing the title role of Cassian Andor, the sacrificial hero of Rogue One, but he also serves as an executive producer. He knows this character inside and out, and the fan enthusiasm towards Andor reflects that. He’s one of the most beloved characters in Star Wars history, so it’s no wonder he’s getting 24 episodes devoted to him.

But could we see even more of Cassian? The answer looks like yes, but with a few conditions.

Inverse asked Diego Luna if he would be open to playing Cassian Andor again, even if it was just in an animated voice role.

“Obviously, if the story matters,” Luna says. He references the singular voice of Rogue One and Andor, both written by Tony Gilroy, writer of the Bourne trilogy.

“I've been part of two projects in Star Wars where we had a clear objective,” he says. “We wanted to do a different film, a standalone story that would bring tonally and visually a different approach to the Star Wars universe, and the same thing with the series.”

Andor stands separate from other Star Wars TV shows like The Mandalorian or Obi-Wan Kenobi. “We are meant to be different,” Luna says. “We can explore different tones, we can be a spy thriller, we can be political.”

That said, anything is on the table if it fits the same mission statement as Cassian’s previous appearances. “If I ever get the chance to keep being part of this universe with an objective and an ambition like this, obviously I'll always work with these people,” he says.

The question remains, however, if there will ever be another series like Andor.

Where could Cassian theoretically appear? The timeline is tricky to work out. Andor tells the story of how Cassian joined the Rebellion and became one of its key operatives, and Rogue One showed him sacrifice himself to secure the Death Star plans for Princess Leia. Andor’s 24 episodes are meant to cover every step of Cassian’s journey, so that doesn’t leave much room for additional appearances.

There’s always the possibility that a character in Andor will get their own spin-off, or maybe Cassian could somehow make a cameo in an animated series like The Bad Batch (although that show is currently set 20 years before Andor, making a future animated series a more likely destination). But if it’s the right fit, Diego Luna would jump at the chance to return to the universe.

“I really like working with Lucasfilm, and it’s been a pleasure,” he says.