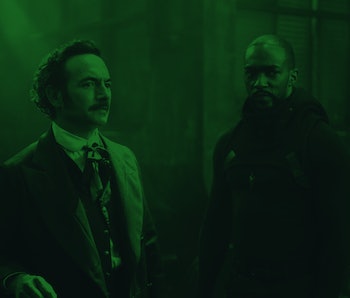 After a very long wait, Altered Carbon is finally back. The body-jumping cyberpunk series returns to Netflix this week, but when exactly do new episodes arrive? Here's everything you need to know about the Altered Carbon Season 2 release date on Netflix.

So what time does Altered Carbon Season 2 release? The good news is that Netflix is pretty consistent with this kind of thing. The bad news is that the company consistently releases new shows at arguably the worst possible time.

Every new Netflix release happens at 3 a.m. Eastern, which might sound weird until you realize that's midnight in California where the company is based. So for anyone on the East coast, your only option is to stay up absurdly late, wake up absurdly early, or just wait an extra day to start binging. Altered Carbon Season 2 isn't any different, and the show will release at 3 a.m. Eastern on February 27 (aka, tonight).

Netflix is changing things up in a different way for the Altered Carbon Season 2 release. As you likely noticed, the show premieres on Thursday, which is a change of pace from the usual Friday release schedule. It's unclear why Netflix is switching things up, though the company did the same thing with the new series I Am Not Okay With This, which released on Wednesday, February 26.

Maybe Netflix is finally realizing that there are better times to release a new show than 3 a.m. on Friday morning. Or maybe it's just a fluke. But this small change might just be the first clue that the company is finally loosening up on its rigid release times.

Altered Carbon Season 2 takes place several decades after the first season and features a new actor (Anthony Mackie) in the lead role. Don't forget, in this universe, advanced technology makes it possible to transfer your brain (stack) into another body (sleeve). Death is rarely permanent.

Season 2 of the sophisticated and compelling sci-fi drama finds Takeshi Kovacs (Anthony Mackie), the lone surviving soldier of a group of elite interstellar warriors, continuing his centuries-old quest to find his lost love Quellcrist Falconer (Renée Elise Goldsberry). After decades of planet-hopping and searching the galaxy, Kovacs finds himself recruited back to his home planet of Harlan’s World with the promise of finding Quell. Haunted by his past and responsible for investigating a series of brutal murders, Kovacs is stunned to discover his new mission to solve the crime and his pursuit to find Quell are one and the same. With the help of his loyal A.I. Poe (Chris Conner), Kovacs must now partner with new allies to outwit his enemies and find the truth: Who is Quellcrist Falconer?