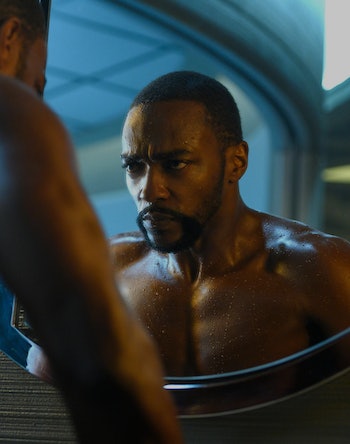 Okay grounders, ready to be resleeved?

It's hard to believe two years have flashed by since Netflix unspooled its neo-noir cyberpunk series Altered Carbon, but such is the blurred nature of time. Resurrected for a sophomore outing after its 2018 run, Altered Carbon is spinning back up for an eight-episode Season 2 starting on Thursday, Feb. 27.

We're psyched out of our stacks to see what creator Laeta Kalogridis and new showrunner Alison Schapker have planned for fans eager to reacquaint themselves with legendary Envoy Takeshi Kovacs. Though there are myriad secrets left to explore as the show advances its scope and worldbuilding, we're most excited to check out Marvel star Anthony Mackie as he slides into the main role of Kovacs this time, taking over for Joel Kinnaman who hung up Elias' Ryker's chiseled sleeve at the end of Season 1.

While we all dream of Altered Carbon's promise of Earth-bound immortality, this dystopian sci-fi show adapted from author Richard Morgan's 2002 novel of the same name has lots of gas left in its source material tank as it (loosely) ventures into the events of the second book, 2003's Broken Angels. Though the series may stray from the exact details of the novel, Season 2 does offer a planetary switch from the Blade Runner-esque metropolis of Bay City to Kovacs' home planet of Harlan's World.

To prime folks for the futuristic flight, we’ve come up with six loose threads, unanswered questions, and Altered Carbon theories that we hope the Netflix show is about to answer. So settle your stacks, strap on your Hello Unicorn backpack, and take a leap into our minds to read our Altered Carbon Season 2 wish list before it needlecasts into your TV sets on February 27.

6. DON'T MESS WITH THE MACK

Sure, we’ve seen Anthony Mackie soaring as Falcon in six Marvel Cinematic Universe flicks and in teasers for the upcoming summer Disney+ series. The Falcon and The Winter Soldier, but now he's stepping into the imposing shoes of Joel Kinnaman's Kovacs as the enigmatic Envoy swaps sleeves for Altered Carbon Season 2. Kinnaman played Kovacs as a stoic rogue soldier trying to unravel the mystery of his identity within an old-fashioned noirish detective yarn. Rather than concentrate on the central whodunnit plotline of Season 1, the new adventures radiate outward into fresh territory with a fresh body and way more action from the looks of it.

Early reviews have remarked that Mackie brings a different vibe and added levity to the role as the show picks up three decades later. His new military-grade sleeve has a few badass modifications and upgrades like rapid healing, enhanced reaction time, biometrically-coded weapons, and other assorted bells and whistles. We can't wait to see how the charismatic, Juilliard-trained actor makes Kovacs his own in Season 2.

5. HITCH A RIDE TO HARLAN'S WORLD

Ready for a serious change of scenery just 80 light years from Earth? Pack your toothbrush, extra socks, and pudding cups, 'cause we're headed to the Glimmer System and Kovacs' birth planet of Harlan's World (aka, Glimmer VI).

Besides a few flashbacks, the majority of Altered Carbon Season 1 occurs on a Blade Runner meets The Matrix planet Earth in the year 2384. In Season 2, we're blasting off-world back to where Kovacs and his sister Rei were born, which is also where he and Quellcrist Falconer trained together and fell in love. The rainy metropolis of Bay City will now be substituted for an unfamiliar realm populated not just with gleaming neon-lit spires, but by roaring rivers, alpine lakes, lush forests, snow-dusted peaks, and a defined presence of the Elders and their leftover otherworldly technology.

4. SING US A SONG, YOU'RE A SONGSPIRE TREE

There's a distinct aura of mystery surrounding this alien plant life beyond the hypnotic chiming and pulsating lights when first observed in Bancroft's mansion in the clouds. This rare songspire tree speciment is said to be the only one on Earth and cost several fortunes, according to Miriam Bancroft, with some trees apparently growing thousands of meters high.

Explained to be a remnant of the Elder's society, the extraterrestrial race responsible for the technology involved in cortical stacks, we still don't know much about the biological marvel, or its function as part of Elder civilization architecture. This sentient lifeform is destined to play a greater role in the story. Whether its design and purpose are benevolent or evil is yet to be determined, but we do get an eerie shot of the weed deploying its tendrils across someone's sleeping chambers in the official Altered Carbon Season 2 trailer.

The resourceful A.I. named Poe, who operates as Kovacs' sidekick and virtual best friend, is played to perfection by Chris Conner. Poe is one of the most interesting peripheral denizens of Altered Carbon and a fan favorite character due to his charm, wit, and love of humanity. His constantly evolving, inquisitive nature makes Poe the perfect delivery mechanism for plot, backstory, black humor, and even the occasional sage advice.

At the end of Season 1, Poe was reduced to brittle digital bits via an electron destabilizer by the sadistic hitman Mister Leung. But he's obviously had his data backed up by the guild and will return in Season 2.

Here's to hoping Quell takes flight during the new season! In Season 1, Quellcrist Falconer (Renee Elise Goldsberry) was revealed to be Nadia Makita, one of the first to pioneer cortical stacks. She also happens to be a formidable mentor and the great love of Kovacs' life.

A rebel who retrains deserter Envoys to survive virtual torture, Quell was presumed dead when Protectorate special forces bombed the resistance fighters' Stronghold on Harlan's World with the Rawling virus. She attempted to escape with Kovacs' sister Reileen in a shuttle that was blasted out of the sky upon takeoff.

Kovacs believed she didn't survive, until Rei reveals that she backed up Quell's stack right before the crash. We're yearning to see these lovebirds migrate back to Harlan's World. Trailers depict Quell and Kovacs' reunion, but we can't promise it will be all hugs and kisses.

The long-extinct alien race’s technology was reverse engineered to create the cortical stacks that give Altered Carbon its sci-fi premise by allowing a person's consciousness to be substituted into other bodies, thus prolonging death. In the books, these beings hail from ancient Mars and were not the precise source of the stack tech. Season 1 only mentions the Elders briefly, and their home planet and species history is murky at best.

In Episode 10 of Season 1, Miriam Bancroft proudly shows off her latest prized artifact: the displayed fossil of an actual Elder, which appears to have an avian-like skeleton. But are they truly all deceased? In Altered Carbon, longevity and immortality reign.

So could we see one of these intelligent angelic creatures alive in Season 2? Hey, we can dream too.