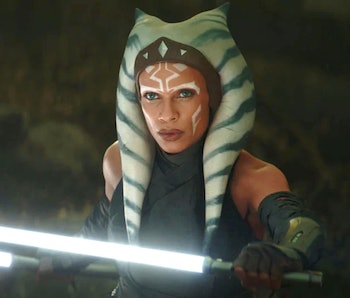 When Ahsoka was announced, it felt like Star Wars fans might be finally getting the continuation of the beloved Rebels series. The massively popular animated spin-off ended on a massive cliffhanger, so it only felt natural that if one of the show’s most beloved characters was to get her own live-action spinoff, then there’d be plenty more overlap. The teaser shown at Star Wars Celebration even includes Rebels darling Sabine Wren reminiscing in front of a mural of her old friends.

As great as a Rebels sequel would be, there will always be a sector of fans who are just now meeting these characters for the first time. Thankfully, quotes from the series’ stars suggest it won’t matter how much Rebels you’ve seen — the upcoming series will resonate regardless of how familiar you are with Star Wars lore.

In an interview with Empire magazine, Ahsoka stars Rosario Dawson and Natasha Liu Bordizzo spoke out about the upcoming series and the speculation surrounding it. Says Dawson:

“Dave and Jon [Favreau] are continuing Star Wars in a way where it can be standalone, but it also makes you hungry for more … there have been two instances where [Ahsoka] shown up on a mission, you see how she’s interacting with folks, but you don’t really get her, per se. Even fans who’ve lived with her for so long don’t know where she’s at now in this journey.”

Basically, this iteration of Ahsoka is more than just her appearances in The Mandalorian and The Book of Boba Fett, and even more than the version that appeared in The Clone Wars and Rebels. Even if Ahsoka is the first Star Wars story you’ve seen, it’ll make perfect sense. That’s ideal for a Star Wars show, to function as a standalone adventure in a bigger universe.

Bordizzo, who is set to bring the spunky Mandalorian Sabine Wren to life, notes that she’s seen the speculation regarding the continuation Rebels but clarifies it’s not necessary to have seen it, though it is nice.

“A lot of people have not seen Rebels,” she says. “It’s great for them to have seen it, but we’ve got a standalone chapter as it is.”

There are pros and cons to this choice. It does mean that every Star Wars fan can enjoy the series without prerequisites, but it also means there’s a possibility this series won’t answer some of the biggest lingering questions after the Rebels finale. While it’s clear Ahsoka is still on the hunt for Grand Admiral Thrawn — we see her ask about him in The Mandalorian — we may not get the answers until much later.

However, considering the success of Rebels, it’s unlikely the characters will change that much. Everyone fell in love with the animated versions of Sabine, Hera, and Ezra. Why would that change as things shift to live-action?