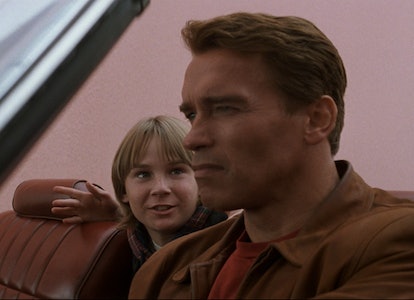 A ’90s Arnold Schwarzenegger action movie from the director of Die Hard and the writer of Lethal Weapon sounds like the surest of sure things. John McTiernan directed Schwarzenegger in one of his most famous and successful roles in 1987’s Predator, and Shane Black both played a supporting role in Predator and contributed uncredited rewrites to the script. A movie reteaming the three blockbuster kingpins should have been unbeatable.

And yet their 1993 big-budget spectacle Last Action Hero was a notorious failure, torn apart by critics and remembered as one of the biggest box office flops of all time. It precipitated a Hollywood decline for its three major creative forces, although they all bounced back with varying degrees of success afterward. Looking back nearly 30 years later, though, Last Action Hero seems like a movie ahead of its time, full of clever meta-commentary on action movies and Hollywood. It also features one of Schwarzenegger’s most layered, underrated performances, bringing depth to a character who’s only slightly removed from being an actual cartoon.

Schwarzenegger plays Jack Slater, the hero of a series of bombastic action movies beloved by scrappy New York City 12-year-old Danny Madigan (Austin O’Brien). Schwarzenegger also plays a version of himself, and he tackles Slater’s unique take on Hamlet. The doppelgangers come together thanks to a Willy Wonka-like golden movie ticket that Danny receives from his only friend, Nick (Robert Prosky), the grizzled projectionist at a vintage NYC movie palace that’s seen better days.

Nick claims the ticket was once given to him by Harry Houdini himself, and when Danny uses it for a special advance screening of the new Jack Slater movie, he’s magically transported into Slater’s heightened movie world. There, Danny is an expert on everything that LA cop Jack is investigating, from the plans of drug kingpin Tony Vivaldi (Anthony Quinn) to the dying words of Jack’s favorite second cousin (Art Carney). Jack doesn’t understand how this kid knows everything about him, but Danny is deeply familiar with all the rules of action movies. “We’re perfect buddy movie material!” he tells Jack, in both a parody of action movie cliches and an accurate description of the actual movie he’s in.

Last Action Hero is all about those have-your-cake-and-eat-it-too moments, and McTiernan doesn’t pretend that he’s not a master of directing action sequences just because he’s now making a parody. Last Action Hero exists somewhere around the intersection of The Naked Gun, Die Hard, and later Black projects like Kiss Kiss Bang Bang and The Nice Guys, and it’s easy to get caught up in the excitement of the action even as Danny frequently points out that none of it carries any real consequences. The world of Jack Slater is filled with Looney Tunes-style Acme products and suspiciously attractive women in skimpy outfits, and Jack’s police colleagues include a cartoon cat voiced by Danny DeVito and a digital recreation of the late Humphrey Bogart.

Danny revels in the cinematic fantasies he’s been using to escape his rough life, tagging along with Jack as he investigates Vivaldi’s plans and faces off against diabolical assassin Benedict (Charles Dance), whose villainous trademark is an array of glass eyes. But Last Action Hero isn’t just a silly kids’ fantasy movie, and Danny discovers that Jack, even as a movie character, is full of angst.

Jack is lonely and exhausted from his increasingly outlandish adventures, and he lives in a bare apartment with a closet full of identical shirts, jackets, and guns. He’s haunted by the death of his young son in the third Jack Slater movie, a casual filmmaking decision that has irrevocably tinged his life with sadness. As Jack’s improbably attractive college-age daughter Whitney (Bridgette Wilson) notes, Danny is the same age that Jack’s son would have been had he lived.

The filmmakers establish that melancholy background without distracting from the movie’s giddy entertainment value, self-aware references, and suspenseful set pieces. Danny’s efforts to convince Jack that they’re really in a movie include pointing out that every phone number begins with 555, and he attempts to get Jack to utter a swear word that would violate the PG-13 rating. Later, when Benedict gets hold of Danny’s magical ticket and crosses into the real world, he’s delighted to discover that he can shoot people on the street without immediately getting swarmed by police, and Dance luxuriates in his evil glee.

Danny brings Jack into the real world too, where he marvels at the existence of classical music, stays up all night chatting with Danny’s mom Irene (Mercedes Ruehl), and is distressed to learn that cars don’t automatically explode if you shoot them. When Jack confronts Schwarzenegger at the lavish premiere of Jack Slater IV, there’s genuine hurt in his voice as he says, “I don’t really like you. You brought me nothing but pain.” That’s the kind of emotional vulnerability that Schwarzenegger didn’t get to show in many of his more serious action roles in the ’80s and ’90s.

Even in the real world Jack still gets to have his action movie triumph, and Last Action Hero delivers on the crowd-pleasing ridiculousness it promises. In subsequent years, movies and TV shows have grown increasingly meta, with celebrities playing themselves and poking fun at their own images. With its cameos from the likes of MC Hammer and Jim Belushi, Last Action Hero is very much a product of its time, but it’s also aged remarkably well, with a smart, witty perspective on franchises and a genuine love for the power of cinema.

More like this
Culture
Jan. 22, 2023
Keanu Reeves’ star was fading. Then, John Wick happened.
By Alex Welch
Culture
Jan. 25, 2023
Hansel & Gretel: Witch Hunters is a flashback to the strange excesses of 2013
By Mark Hill
Culture
Feb. 2, 2023
After Harry Potter, Daniel Radcliffe Obviously Had to Play a Farting Corpse
By Alex Welch
LEARN SOMETHING NEW EVERY DAY.
Related Tags
Share: