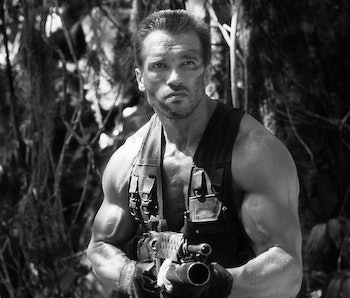 The Alien and Predator’s eternal grudge match makes so much sense when you consider how their two original movies are almost diametrical opposites.

While they share similarities, the two films also stand as polar opposites in terms of action-slashers. Sigourney Weaver and Arnold Schwarzenegger stand wildly opposed to each other in terms of what an action hero looks like. Alien is a quiet movie — in space, its trailers reminded audiences, no one can hear you scream. Predator, on the other hand, is extremely loud.

But John McTiernan’s 1987 movie is fascinating because it uses its loudness and brashness like few others of the time. It’s screaming 1980s action that critiques itself from within.

For screenwriters Jim and John Thomas, Predator started with the Predator. Interested in intergalactic hunting, the brothers asked themselves a few crucial questions, according to Jim in The Hollywood Reporter’s oral history: “What’s the most dangerous creature? Man. And what’re the most dangerous men? Combat soldiers. At that time, we were doing lots of operations in Central America, so that’s where we set it.”

Although the United States was involved in several conflicts in Central America at the time, another era was on the mind of the casting director Jackie Burch: “I remember when I first read the script that I thought, I wanna get all Vietnam vets in this movie.” Although it’s set in another part of the world, the Vietnam metaphors are easy to find in Predator: elite soldiers start getting picked off, one by one, by an enemy that is seemingly invisible.

Predator is a simple story with a huge twist: soldiers that the audience has been told are invincible aren’t. The team, which is led by Schwarzenegger and includes fellow future-governor Jesse Ventura, completes a rescue mission in a guerilla stronghold with ease. But Carl Weathers’ CIA operative Dillon has secrets of his own. The crew captures one guerilla, Anna, who keeps wanting to escape. The only woman in a cast bursting with machismo, Elpidia Carrillo holds her own.

But before anyone has time to deal with Weathers or Carillo, they discover a much bigger problem: something out there is killing them.

Shooting Predator was harder than writing it. The Thomas brothers first met with Schwarzenegger in a hot tub to discuss the movie. Bill Duke, who plays Mac, described filming in THR’s oral history, with humid temperatures reaching “90-something or more” and “carrying your body weight, you have clothing on, and then you’re crawling through the jungle on your stomach and there are coral snakes and spiders and scorpions and a lot of different things.”

On top of the tough conditions, there was also the physical upkeep of the actors to look after. Duke describes a “gigantic gym that Arnold shipped to Mexico” that was set up in their hotel’s ballroom. By all accounts, Schwarzenegger was as much a leader on set as McTiernan, setting the tone of the production and even cutting lines from his own character, Dutch, who he considered a man of few words.

Predator follows through on the age-old promise of movies: put in a tremendous amount of work and it will look seamless on the screen. McTiernan works with military efficiency. Time and again, the movie quickly establishes its stakes in one scene, follows through on an action, and lets that action move to its next scene, where stakes are established once again.

These scenes never feel cold, and are bolstered by the occasional one-liner or needle drop, like the timeless helicopter trip into the jungle with “Long Tall Sally” playing on a boombox. They’re helped along by a sweeping, bouncy score from Alan Silvestri, which gives the movie driving energy while never being overly aggressive.

Predator strips itself down layer by layer until Arnold has thrown away all his guns for spears and is covering himself in mud. The movie offers a preview of what McTiernan would do time and again in his career, including in Die Hard and The Hunt for Red October: start with a large conflict and over the course of the movie and reduce it down to two people.

Watching Schwarzenegger make this transition remains a fascinating and visceral experience. Predator pays off in its loudest moments when characters are exploding or screaming. While its legacy was weakened through a series of terrible sequels, Predator remains one of the definitive action movies of the century.

Predator is streaming now on Hulu.