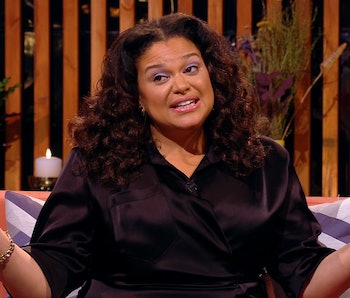 This article about Season 2 of the series The Circle was originally published on January 16, 2020 and updated on July 10, 2021 following the release of the season on Netflix. Read on for the original article, with some new changes to reflect the latest updates on this topic.

The Circle might be the weirdest new show on Netflix right now — and that’s saying something when it’s competing with a Fast & Furious animated series and a sitcom about crime-fighting doctors. The dystopian reality show, which follows a group of people as they compete via a fake social network to become the most popular influencers and win $100,000, just wrapped its second season on Netflix earlier this year. Here’s everything we know, including if Season 3 is on the horizon.

What is The Circle?

If you’re new to the show, here’s a quick summary. If you've already binged Season 1 on Netflix, feel free to skip ahead.

The premise of The Circle is equal parts basic and confusing. Based on a UK reality TV competition, the series hinges on a faux social network, also called The Circle, that’s half Tinder and half group chat. Each contestant is sequestered in their own fancy apartment, and the only way to communicate is via the Circle, where everyone can create their own carefully manicured profiles.

The twist (sort of?) is that not everyone is who they claim to be. Of the eight original contestants, two are catfish, using images of someone else and posing as that person in both group and one-on-one conversations (all communication is written). Everyone else is obsessed with identifying and outing the catfish in their midst, though it’s never really clear why that matters.

The only thing that actually matters is the daily ratings, where each player anonymously rates everyone else. Those ratings are tallied to reveal who’s the most and least popular. The two top “influencers” pick one person to “block,” meaning eliminate from the competition. Being popular is important, but so is not appearing as a threat. Whether or not you’re a catfish doesn’t seem to really matter.

So that’s The Circle. It’s one thing to describe it; it’s another to watch it for yourself — especially when the two catfish end up accidentally catfishing each other…

When was The Circle Season 2 release date?

The Circle Season 2 premiered with its first four episodes on April 14, 2021. It aired four episodes per week, with the finale dropping on May 5, 2021.

Is there a trailer for The Circle Season 2?

Yes! Netflix dropped a trailer for Season 2 mere weeks before it premiered. It introduced many members of our starting cast, including an appearance from Lance Bass! Or at least someone pretending to be him...

What happened in The Circle Season 2?

In The Circle Season 2, a catfish took it all. Deleesa Carrasquillo took home the $100,000 grand prize, spending the entire season playing as her husband “Trevor.” Chloe Veitch, who previously appeared on Netflix’s Too Hot to Handle, came in second place and received the $10,000 Fan Favorite prize. Courtney Revolution came in third place. Other finalists include author Lee Swift, who played as his own 24-year-old character of “River,” and Jack Atkins and Lisa Delcampo. The latter pair were blocked in the middle of the season for their own failed catfish attempts but were brought back to play as one new person.

Will The Circle return for Season 3?

Never fear, Circle fans: More is on the way! Netflix announced all the way back in March 2020 that the series would be renewed for both Seasons 2 and 3 simultaneously. Unfortunately, there has yet to be an announcement as to when that would happen. But considering the show has now aired annually, we can probably expect Season 3 of The Circle sometime in 2021.

The Circle Seasons 1 & 2 are streaming now on Netflix.

More like this
Entertainment
8.5.2022 7:00 AM
The Sandman is Netflix’s first great comic book adaptation
By Mónica Marie Zorrilla
Culture
8.5.2022 11:30 AM
You need to watch the best James Bond movie of the century on Netflix ASAP
By Alex Welch
Gaming
8.9.2022 9:18 PM
Did you know Netflix has games? Here's how to find them
By Robin Bea