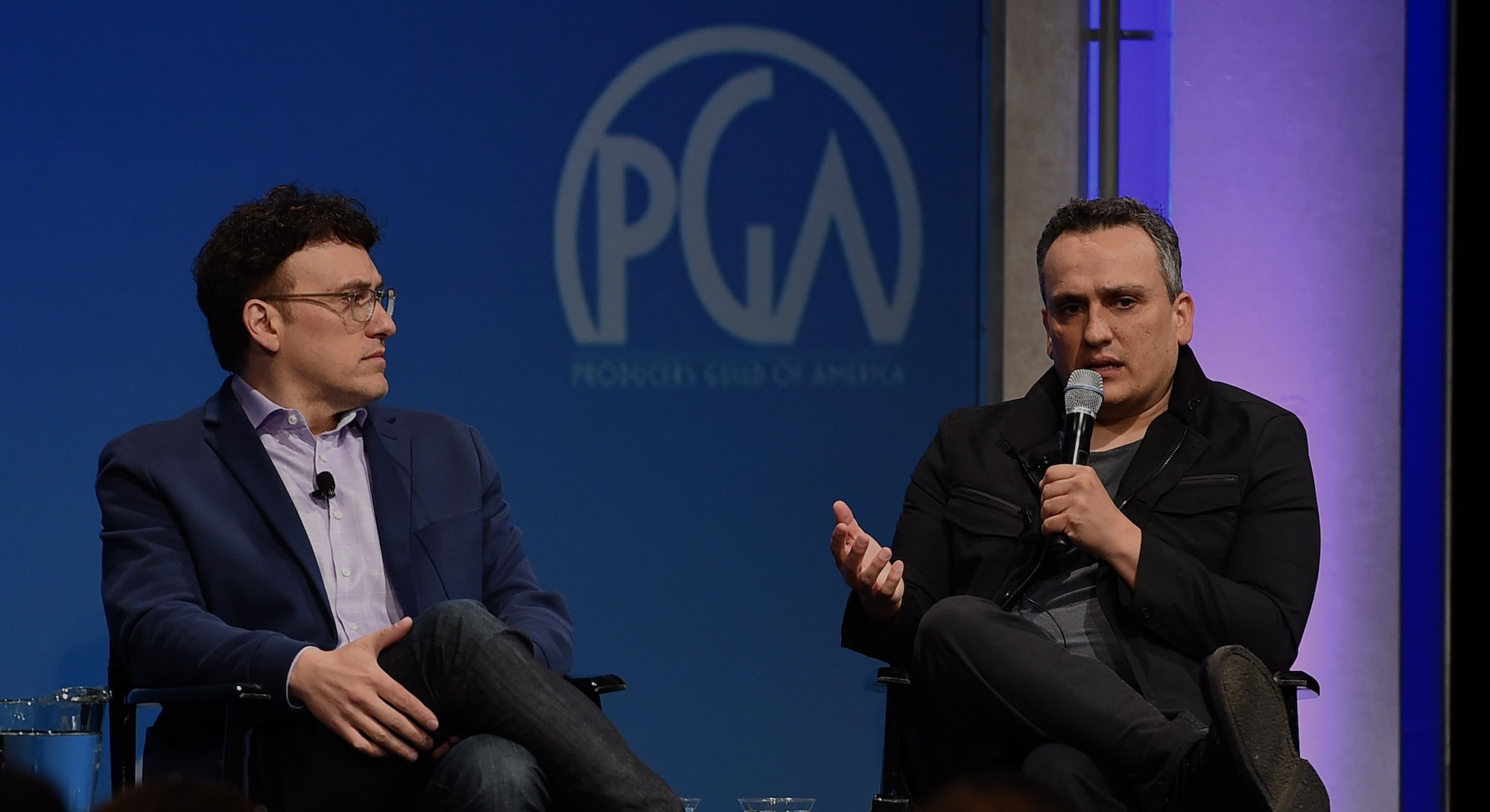 Joe and Anthony Russo made movie history with Avengers: Endgame, a 3-hour epic that wove together 10 years of Marvel movies and broke box office records around the world. So what’s next? A quick scan of the IMDb pages for the filmmaking duo known as the Russo Brothers reveals, well, a lot, from 21 Bridges (a gritty cop drama in theaters this Friday) to Cherry (Tom Holland plays an opioid-addicted Iraq War veteran who robs banks, coming in 2020) to Past Midnight (a Keanu Reeves superhero movie with no set release date).

In short: Directing the most successful movie of all times comes with a few perks.

“The luxury of coming off of movies like Infinity War and Endgame is that you can get complicated subject matter made in a difficult market for content like that,” Joe Russo tells Inverse.

In a 15-minute phone call, the Russo Brothers opened up about producing 21 Bridges, directing Cherry (they’re about halfway done with filming right now), and what else the future might hold. They also unpacked several deleted Avengers: Endgame scenes that just released on Disney+ and revealed the one new Marvel show they’d want to work on. Spoiler alert: It’s Moon Knight.

Inverse: 21 Bridges is the first movie with your name attached to it since Avengers: Endgame. I’m curious, what drew you to this story in particular?

Joe Russo: We have an emotional fondness for genre films, elevated genre. We grew up on them. Our father was a big genre movie buff, and we were informed by movies like The French Connection, …And Justice for All., The Taking of Pelham One Two Three. Gritty New York cop films with social context and relevant theme.

We felt a movie like that hadn’t been made in a while, and we were compelled to tell that kind of story. We think that elevated genre is a great way to deliver ideas to an audience. You can tell a really exciting, impulsively watchable story, but you can also challenge the audience so that when they walk out of the theater, they’re thinking about the ideas in the film as much as they’re thinking about the action and the great acting.

Inverse: Something interesting to me in 21 Bridges is there’s not really one clear villain. Everyone’s got a little bit of good and bad in them, which feels like a change from the more clear cut Marvel universe. Is it intentional that no one is fully evil in this movie, or do you think 21 Bridges has a clear villain?

Anthony Russo: That’s part of the tragedy of the film, and it’s also very reflective of how police corruption has been dominating our national psyche for several years. Typically, when you have an issue that remains challenging and difficult and unresolvable, it’s because it’s so complex there are no easy answers. Our goal with this film was to tell a thoroughly modern and relevant story about police corruption, so there can’t be an easy villain. Because if that were the answer, we would have been able to solve the problem by now.

I do think that’s an idea that we’ve always tried to include. It may be more extreme than what we’ve done in the Marvel movies, but even there, you can see that we have a fondness for flawed heroes and villains with virtues.

Inverse: 21 Bridges also has an almost John Wick feel to it in the way you keep going deeper and deeper into an expanding world of New York corruption. Was that something you were trying to achieve?

Joe Russo: The idea is there’s truth behind the truth behind the truth. It’s complicated. New York is the perfect example where you have so many layers to that society, even just in the way the buildings and bridges and tunnels all exist on top of each other. It’s such a wonderful metaphor for this idea of layers and the discovery of new ideas as you move through each layer.

How do you make that an interesting journey? For us, we like to sort of turn the journey on its head over and over again as you move through the story. So all of your assumptions when you start aren’t necessarily true by the time you reach the end. That’s part of the reason why we love this genre of filmmaking. It’s this idea that all is not what it seems and all is not what it appears to be. There’s a journey to be taken to discover the real truth.

Inverse: When Disney+ launched last week we got to see some new deleted scenes from Avengers: Endgame, including one where a dead Tony Stark meets the adult version of his daughter in a vision. Why did you decide not to use that scene?

Joe Russo: Part of the process is we go through a long period of exploration when we make these films. That starts at the very beginning with Markus and McFeely where we sit around and just talk about the story for months, what the possibilities are, where we can go. That sort of sense of exploration continues all the way through our shooting of the film and post-production. So there was a while where the idea was that when you use the Soul Stone there is sort of this moment that you have this kind of reckoning with something that may be left unresolved in your soul.

Since Thanos had that poignant experience with his daughter in Infinity War, we started playing with the idea that there was something interesting and resonant in the symmetry with Tony and his daughter. The reason we ended up moving away from it is, once we shot it, we began to understand as we were actually shooting it, is that the audience didn’t have a relationship with his adult daughter in the film. They had a relationship with his young daughter but not with his adult daughter. It didn’t feel like it was as powerful as we may have thought so we began to move away from it.

Inverse: What about the alternate Soul Stone scene where Hawkeye and Black Widow have to fight off a bunch of Thanos’ henchmen on Vormir? What happened there?

Anthony Russo: That was another example where we began to smell this as we were executing it and confirmed it once we started to focus more on editing this. We wanted to make it Black Widow’s final test with Hawkeye, a character who she’s been so close to, but the cuts all of a sudden became between them and a bunch of Thanos’ minions, who we didn’t have any relationship with.

So we started talking about it in post-production with our editor Jeff Ford. We started spitballing: Isn’t the best version of this scene Hawkeye versus black widow? We have two heroes, neither of whom is gonna let the other die? They both know they have a mission that involves one of them sacrificing themselves and these characters had such a rich relationship throughout the MCU. So why don’t we just make the conflict between these two characters?

Inverse: So was that a reshoot?

Inverse: Speaking of Marvel, with Disney+ bringing a ton of new characters to the MCU, are there any that you’d want to work on as a Disney+ show?

Joe Russo: Moon Knight would be fun. It’s hard to say because we’re in the middle of Cherry right now. We’re on location in Cleveland shooting at the moment. But anything Marvel does is going to be special. And we’ve had such an amazing working relationship with them that I’m sure we’re all gonna find something to come back together.

Inverse: What’s happening with Cherry? You released that one photo and it looked really exciting. Where are you in the process now? When will we see a trailer?

Joe Russo: We’re about halfway through shooting. We’re filming on location in Cleveland where the novel is set. This is the fourth movie we shot in Cleveland now. We’re from Cleveland. The novel is set in many areas of the city that we are very familiar with. So it’s a really special and personal project for us. As far as when you might see something from it, it’s kind of too early to say.

Inverse: Cherry is based on a pretty intense book. How gritty will this movie be?

Anthony Russo: It’s about as gritty as movies get. If you read the book, it’s a story about the opioid crisis that involves the Iraq war, PTSD, heroin addiction, Oxycontin addiction, bank robbing. It’s a very intense film and Tom Holland is absolutely bringing it every day. We’re so impressed with his performance in this movie. It will be a very intense film. It’s also a very artful film, and it’s about a very important subject matter that doesn’t seem to be getting addressed properly: The opioid crisis.

Inverse: This is the first movie you’re directing since Endgame. Has this been a passion project for you?

Joe Russo: It’s a very emotionally important movie for us. We’re from Cleveland, Ohio where the character is from. That part of the country has been designated ground zero for the opioid crisis. We’ve had a lot of people we were very close to die because of the crisis. We felt that it was a story that needed to be told and the luxury of coming off of movies like Infinity War and Endgame is that you can get complicated subject matter made in a difficult market for content like that.

Inverse: I don’t know if you saw, but a bunch of the Community cast recently said they want to do a movie if Dan Harmon writes it. One of your first big jobs was working on Community so would you want to be involved in the movie?

Anthony Russo: We love that cast dearly and we’re still very close friends with everyone in that cast. We had a very special experience working on that show. So, of course, we’d want to be involved with any movie versions.

Inverse: You’re producing a lot of movies now, but one of the most intriguing is Past Midnight, which is a superhero movie starring Keanu Reeves. Can you tell me anything about that?*

Joe Russo: Past Midnight’s still in a very formative stage. So it’s probably not best to talk about it yet, but it is a fascinating script.

Inverse: So of everything you’re working on, what are you most excited for?

Joe Russo: Oh, certainly Cherry, pouring our hearts and souls into that project and we’re very happy with where we’re at right now.

21 Bridges is in theaters November 22.