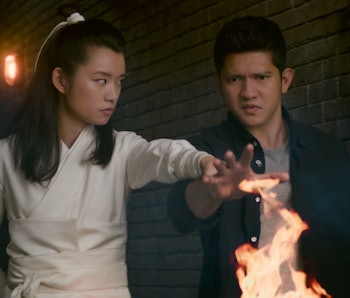 The world still needs the Wu Assassins. The first season of the new martial arts action drama Wu Assassins is now in the rearview, setting fans up for anticipation over what could happen in Season 2. It’s worth pointing out that Netflix has not yet confirmed a second season. As of now, no one is sure if Wu Assassins will return. But bookmark and return to this page frequently as we’ll update it with new information when they’re revealed.

For now, here’s everything we know about a possible Wu Assassins Season 2, from when it may release to possible plots.

What happened in Wu Assassins Season 1?

Spoilers for Wu Assassins ahead.

In Wu Assassins, a San Francisco Chinatown chef named Kai inherits an ancient, mystical power from elemental warrior monks. When Kai gets the attention of organized crime lords, he must team up with his friends, including Jenny (Li Jun Li), Xu Lin (Lewis Tan), and Tommy Wah (Lawrence Kao), as well as an undercover cop, Christine “CG” Gavin (Katheryn Winnick) to stop them.

While Kai’s father, Uncle Six (Byron Mann), is set up as the initial antagonist, the real big bad is revealed to be McCollough, a Scottish crime boss revealed to be the Wood Wu Lord. At the end of Season 1, Kai and his friends enter the Path — an extra-dimensional plane of existence separate from the human world — before returning to the human world, where Kai kills McCollough.

Six weeks later, things have calmed down. Uncle Six’s lieutenant, Zan (JuJu Chan), is said to be back in Macau recruiting new members for the Triad, but for now, she’s in the wind. Jenny courts an offer to take up political office in Chinatown while CG and Lu Xin strike up a romance. Kai, now head chef in Tommy’s restaurant, meets his spiritual guide, Ying Ying (Celia Au), in person. As the restaurant crumbles and San Francisco endures an earthquake, Ying Ying tells him ominously that the world still needs the Wu Assassins.

Is Wu Assassins getting a Season 2 renewal?

It is not confirmed if Wu Assassins will get another season on Netflix.

In an interview with Inverse, Tan admitted the difficulty in getting a second season when it’s an original property and not an adaptation.

“It’s very difficult to create original action fantasy without an IP or a comic book,” Tan told Inverse. “The studios are looking for that now. We’re trying to create something new.”

What’s this I hear about a Wu Assassins film?

Yes! Though Season 2 has yet to be confirmed, the Wu Assassins adventures will continue in a standalone film. The movie, titled Fistful of Vengeance, was announced in 2021. The 90-minute feature will bring back series stars Iko Uwais, Lewis Tan, Lawrence Kao, and JuJu Chan Szeto. In addition, Pearl Thusi, Francesca Corney, Jason Tobin, and Rhatha Phongam will also star in the film.

We have no idea. Filming for Season 1 started on August 8, 2018, and the series released on Netflix exactly a year later. Then again, that assumes there’s already a script, and considering that the show hasn’t even been renewed yet, this seems unlikely.

Is there a Wu Assassins Season 2 trailer?

Not yet, and it probably won’t arrive for a while. Assuming the show is renewed, an official Season 2 trailer will probably drop just a couple of weeks before the full season. Then again, a renewal announcement might come with a sort of mini-teaser, but don’t expect any new footage for a while.

What will happen in Wu Assassins Season 2?

In an interview with Inverse, Lewis Tan teased the series can show off more action now that the fantasy world of the series has been established.

“It took a while to break that ground, but once we break it, I feel the show really gets up and running,” Tan said. “We have the backstory set in stone. We don’t have to go there again. We can really run wild with the action; we don’t need to sell the backstory as hard as we did in the [first] series.”

“I don’t think I’m spoiling this because it is spoken about in the last episode,” she said. “I think Jenny gets into politics. We don’t know much about where it can go, but I do know Jenny might go into politics.”

In an interview with Digital Spy, Celia Au discussed the potential second season exploring the other 997 Wu Assassins that Ying Ying mentored.

“I like the fact that when you meet her and even at the very end, she’s all mysterious,” she said. “I definitely want to see more about what happened with the other 997 Wu Assassins. In my mind, throughout the years of her failing her mission and seeing her Wu Assassins dying, she becomes less emotional and harder and harder on her Wu Assassins – because she can see the consequences, and she’s seen it all. She doesn’t want for it to repeat itself even though it has 999 times.”

When will we know about Wu Assassins Season 2?

Netflix famously keeps its strategies close to the chest, including viewer statistics and how the streaming giant decides when to renew or cancel original programming. It’s truly anyone’s guess when, or if, Netflix will renew Wu Assassins.

All that anyone knows for sure is that fans simply need to watch Wu Assassins and tell their friends with Netflix accounts to watch it too. At some point, if enough accounts binge the series, that will tell Netflix there’s a demand that’s worth fulfilling. As Ying Ying said, the world still needs the Wu Assassins.