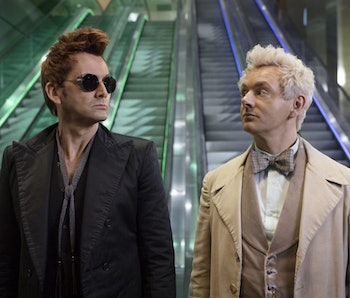 Amazon Prime Video delivered the goods over the weekend of June 1, 2019 — the Good Omens, that is. After lots of anticipation, the six-episode limited series starring Michael Sheen, David Tennant, Jon Hamm, Adria Arjona, and a truly stacked supporting cast landed on Prime Video. Longtime fans of the 1990 novel Good Omens, written by Neil Gaiman and Terry Pratchett, have devoured the limited series, while new viewers have discovered this quirky, high-fantasy story for the first time.

Good Omens follows longtime friends Aziraphale, an angel (played by Michael Sheen), and Crowley, a demon (played by David Tennant), who’ve become a little too comfortable with life on Earth. The two team up to help prevent the apocalypse, but after discovering they spent 11 years trying to stop the wrong child from becoming the Antichrist, Aziraphale and Crowley only have a few days to find the right child and help him see reason before bringing about the end of the world.

Even though Good Omens was only ever meant to be a limited series, the final episode left us with plenty of possibilities for the story to continue, but will a Good Omens Season 2 happen?

Here’s everything we know about Good Omens Season 2, including which cast members could return, what the season’s story could be about, and when the release date might be.

Spoilers ahead for Good Omens Season 1.

Will Good Omens return for a Season 2 release date?

Yes! Neil Gaiman himself made the announcement on Twitter of Good Omens renewal on June 29, 2021. Posting a picture of Crowley and Aziraphale standing under an umbrella together, the author wrote, “What glorious (and dangerous) trouble will our favorite angel and demon find themselves in this time?”

Who could return for Good Omens Season 2?

Pretty much everyone in the original cast could return. Thanks to Crowley and Aziraphale helping avert disaster in the form of the apocalypse, everyone we met over the course of Season 1 lived to see another day.

Among those most likely to return would be: Michael Sheen as Aziraphale; David Tennant as Crowley; Jon Hamm as Gabriel; Adria Arjona as Anathema Device; Jack Whitehall as Newton Pulsifer; Sam Taylor Buck as Adam Young; Frances McDormand as the voice of God; Michael McKean as Shadwell; and last but not least, Miranda Richardson as Madame Tracy.

The only characters we probably won’t see again are the four horsemen of the apocalypse, who are defeated at the end of Good Omens. The only exception there is Death, who can never actually die.

How did Good Omens Season 1 end?

The end of the world was successfully avoided in Good Omens Season 1.

After mixing up the identity and location of the Antichrist, Aziraphale and Crowley were able to make contact with Adam Young, the aforementioned Antichrist, and convince him that he didn’t need to follow daddy Satan’s wishes to bring about the end of the world. A showdown between Adam and his friends against the Four Horseman of the Apocalypse and Satan at the U.S. Airbase just outside the sleepy hamlet of Tadsfield proved that Adam was capable of preventing the end of the world.

Good Omens ended with Adam continuing to live his life in Tadsfield with his friends while Newton and Anathema shacked up together as a couple in her Tadsfield home. Anathema burnt up the second book of prophecies written by her witchy ancestor, Agnes Nutter. Meanwhile, Aziraphale and Crowley, having avoided discorporation and able to return to their lives on Earth, celebrated with a meal at The Ritz in London. Despite the newfound peace, Crowley seemed convinced the actual war — the one between the humans, angels, and demons — was still coming.

Where could the Good Omens story go from here?

One very interesting thing about the final episode of Good Omens is the fact that after Adam defeats Satan, what we see in the episode was either added or tweaked by Gaiman, who wrote the entire Season 1 screenplay. As Radio Times notes:

“The novel ends with Adam and Dog running off to wreck some more mischief in Tadfield following his successful stand-off against his father, Satan himself, but the kidnapping in St James’ Park and the body-swap scene were both added to the show.”

That means the final scenes of Good Omens are entirely new. It’s possible that Gaiman might simply be giving fans the conclusion he wished was included in the books, but he may also be leaving the door open for a Season 2. At the very least this proves that there’s always room for more story beyond the original novel.

With that in mind, there are three big threads that could be followed in Good Omens Season 2.

1. The Continuing Friendship of Aziraphale and Crowley

Aziraphale and Crowley have been friends for over 6,000 years; you think their friendship will really stop now? These two have shirked party loyalty (Aziraphale is no longer the devout heaven-sent miracle worker he was meant to be and Crowley’s been cast off by his hellish co-workers) and chosen to protect the Earthly masses. If the next big war is really coming, as Crowley predicted at the end of Season 1, then the next season should follow these unlikely friends as they try to figure out how to stop it from happening.

2. The Further Adventures of Anathema and Newton’s Occultist Investigations

Anathema destroyed the second volume of Agnes Nutter’s prophecies, but that doesn’t mean she’s done with the occult for good. With Newton, a witch hunter-in-training, now on her side, these two could be assets to Aziraphale and Crowley once again in stopping the next great war between humans, angels, and demons. They could also get sucked into their own occult mystery that occupies most of their journey in Good Omens Season 2, like possibly tracking down other witches or defeating demons.

3. What Happens Next to Adam the Former Antichrist and His Friends

Adam still has a lot of growing up to do but it's clear that some of his otherworldly powers remained intact even after he rejected his real dad, Satan. The Good Omens Season 1 finale saw Adam mysteriously turning a verdant bush into nothing, letting Dog (who is still a Hellhound as far as we know) out and giving him an excuse to run after him. Adam still has lots of youthful vigor left in him and possible big powers to hone that could be useful in a coming war. Season 2 could deal with Adam coming to terms with those powers as he goes into puberty.

Are any other stories from Gaiman and/or Pratchett in development?

Gaiman’s work was showcased on American Gods, which ended after 3 seasons on Starz in 2021. Filming for a long-awaited adaptation of The Sandman is currently underway, expected to end in June 2021. Per Gaiman’s IMDb, there’s his literary work The Graveyard Book is marked as “In Pre-Production” but it’s still unclear if there are any new developments on that project as it’s respectively been in development for years with no signs of moving forward in a meaningful way.

There is no word on whether any of Pratchett’s other work from his voluminous catalog will be brought to life in film or TV anytime soon.

This article was originally published on June 4, 2019