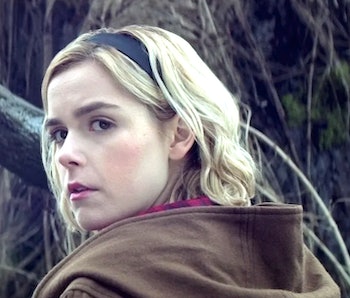 This article about Season 3 of the series Chilling Adventures of Sabrina was originally published on December 9, 2019 and updated on June 23, 2021 following the release of the season on Netflix. Read on for the original article, with some new changes to reflect the latest updates on this topic.

Praise Satan! Netflix’s Chilling Adventures of Sabrina returned for a Season 3, as well as a Season 4 to follow. Netflix made this double-renewal announcement in December 2018 around the time that the Christmas Special episode was released, which was long before Season 2 hit Netflix in April of 2019.

So what was next for everyone’s favorite witch?

Chilling Adventures of Sabrina Season 2 empowered Sabrina to reject her destiny as defined by Satan’s patriarchal dominion. Rather than become the herald of the apocalypse, Sabrina dodged such a grim fate and defeated her real father, Satan, but it cost her boyfriend Nick. Using advanced magic, they were able to trap Satan inside Nick’s body, condemning them both to Hell, where Lilith now rules. Even the future of Hell is female in Chilling Adventures of Sabrina. At the very end of Part 2, Sabrina recruited her best friends Theo, Roz, and Harvey to plan a mission to infiltrate Hell to save Nick.

Here’s everything we know about Chilling Adventures of Sabrina Season 3.

When was the Chilling Adventures of Sabrina Season 3 release date?

In the brief teaser video, Sabrina appears in a red cloak shrouded in mist and darkness. “Welcome to Hell,” a creepy voice whispers. “knock knock knock on the gates of hell,” the tweet reads. We know there’s a gate leading to Hell in the mines of Greendale, so this makes a lot of sense.

Sabrina originally debuted on Netflix in October 2018. Then after a 2018 holiday special, Part 2 debuted in April 2019. For Part 3 to be released in January 2020 is unprecedented. It’s also worth noting that Parts 1 and 2 — with the holiday special — technically count as Season 1. Season 2 was comprised of Parts 3 and 4.

How many episodes are in Chilling Adventures of Sabrina Season 3?

TV Line reported in December 2018 that Netflix had renewed Chilling Adventures of Sabrina for 16 additional episodes. A year later, when the release date was announced in early December 2019, Fansided reported that Part 3 and 4 would each be eight episodes. (That additional 16 episodes technically counts as Season 2.)

Who was in the Chilling Adventures of Sabrina Season 3 cast?

All of the main Chilling Adventures of Sabrina cast members returned for Season 3. That includes:

The newest addition to the main cast for Season 3 was Gavin Leatherwood as Nick Scratch. The warlock had been a recurring role in Season 2 but was bumped up to the main cast when he became a bigger part of the story.

How did Chilling Adventures of Sabrina Season 2 set up Season 3?

The biggest revelation from Season 3 involved the unholy trinity that created Sabrina. It was between a human (her mom, Diana), a warlock (her dad, Edward), and the Devil.

Satan planned for Sabrina to bring about the apocalypse and then join him in ruling over Hell, but she had other plans. With the help of her friends, family, and Lilith, Sabrina weakened the Devil and trapped the Devil in Nicholas Scratch’s body. Then Ambrose put a sleeping spell on him. Lilith then took over as Queen of Hell, taking Nicholas/The Devil with her. One of the last scenes in Season 2 showed Sabrina proposing to Roz, Harvey, and Theo that they go to Hell to get Nicholas back.

Meanwhile, the Church of Night has fallen. After Father Blackwood’s murderous and disastrous reign nearly destroyed the coven and killed everyone, Zelda took over as High Priestess, and the Church was rebranded as the Church of Lilith. This creates a drastic shift from a conservative patriarchal structure to a more progressive matriarchal one at every tier of this magical world. Ambrose and Prudence also united over their shared hatred for Blackwood’s misdeeds and vowed to hunt down the warlock.

What was the plot of Chilling Adventures of Sabrina Season 3?

Here’s the official synopsis of Season 3 according to Netflix:

“Part Three finds Sabrina reeling from the harrowing events of Part Two. Though she defeated her father Lucifer, the Dark Lord remains trapped within the human prison of her beloved boyfriend, Nicholas Scratch. Sabrina can’t live with herself, knowing that Nick made the ultimate sacrifice and is suffering, burning in Hell under Madam Satan’s watchful eye. So with an assist from her mortal friends, “The Fright Club” (consisting of Harvey, Rosalind, and Theo), Sabrina makes it her mission to free him from eternal damnation and bring him back into her arms. However, the Dark Lord’s unseating has sent shockwaves through the realms — and, with no one on the throne, Sabrina must assume the title of “Queen” to defend it against a challenger, the handsome Prince of Hell Caliban. Meanwhile, in Greendale, a mysterious carnival rolls into town, bringing with it a threat to the Spellmans and the coven: A tribe of pagans looking to resurrect an ancient evil…”

Was Chilling Adventures of Sabrina renewed for Season 4?

Yes! As mentioned above, Netflix renewed the show for Seasons 3 and 4 simultaneously. This is because, like the first two seasons, they served as two eight-episode parts of one larger story. Unfortunately, that would be the end for Sabrina Spellman and the gang, as Netflix canceled the series in July 2020.

All of Chilling Adventures of Sabrina is streaming on Netflix.