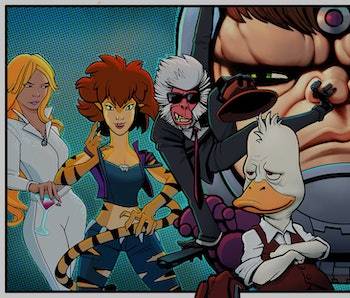 Offenders, assemble! In the early hours of March 2019, the Disney-Fox merger was finalized, giving Disney control of over 60 percent of Hulu. That might be the reason why Disney-owned Marvel Studios announced in February that an upcoming slate of interconnected adult animated series set in the Marvel Universe were in development for Hulu.

Tigra & Dazzler, Hit-Monkey, M.O.D.O.K., and Howard the Duck series were to introduce five new characters from Marvel comics that would eventually come together in a team-up limited series akin to The Defenders, except this one’s called The Offenders.

When these series were announced by Head of Marvel Television Jeph Loeb during a Television Critics Association press tour in February, he specifically used the term “adult animation,” bringing to mind mature animated series like Rick and Morty, Family Guy, or Bojack Horseman. If these were more family-friendly shows, they might wind up on Disney’s upcoming streaming service Disney+, but the House of Mouse has previously confirmed that all of its more mature movies and TV shows would go to Hulu instead.

Unfortunately, The Offenders project was canceled, along with two of the other planned series. But here’s everything we know about what the series would have been.

What was The Offenders about?

Marvel’s new lineup of adult animated series would have debuted these various new characters and built towards “a special animated event for Hulu” called Marvel’s The Offenders. The general idea is identical to Daredevil, Jessica Jones, etc. leading towards The Defenders.

“A giant head. A monkey. A tiger lady and a disco queen. And the duck. Brought together because no one else could but Marvel Television on Hulu,” Jeph Loeb said during a Television Critics Association press tour in February. “M.O.D.O.K., Hit-Monkey, Tigra, Dazzler, and Howard the Duck will form a team no one asked for: the Offenders. (And wait until you see who the team leader is!)”

This is very different from the Offenders in Marvel Comics, a legitimately potent group of supervillains assembled by the Collector and led by Red Hulk that included Baron Mordo, Terrax, and Tiger Shark (not to be confused with Tigra). They came into direct confrontation with a group assembled by the Grandmaster called the “Defenders” that included Hulk, Silver Surfer, Namor, and Doctor Strange, all because the two Elders of the Universe wanted to play a high-stakes game.

Here’s a quick rundown of the four series initially announced that would have fed into The Offenders:

When was The Offenders going to premiere?

The Offenders did not have a premiere date by the project’s cancellation.

Who was in the cast of The Offenders?

A full cast for The Offenders had not been revealed by the project’s cancellation.

Why was The Offenders canceled?

Well, The Offenders hasn’t been formally “canceled” yet by Hulu. However, its chances of going through look to be slim. In January 2020, The Hollywood Reporter announced that Howard the Duck and Tigra & Dazzler were being scrapped while still in development. Tigra & Dazzler particularly had a tumultuous few months, having let go of its showrunner and entire writing staff in December 2019.

With half of the announced shows no longer happening, it’s safe to say the plan to bring everyone together in The Offenders is not going through. But there’s a small chance that Hulu could still make the series. M.O.D.O.K. and Hit-Monkey are still moving forward. And much like The Avengers, the series could introduce Howard, Tigra, and Dazzler to the universe without standalone shows.

This article was originally published on March 20, 2019