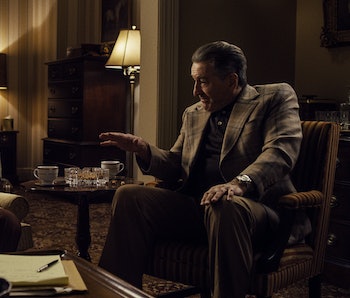 This article about the film The Irishman was originally published on February 24, 2019 and updated on April 28, 2021 following the film's release on Netflix. Read on for the original article, with some new changes to reflect the latest updates on this topic.

The most famous Italian gangster actors ever teamed up in a new Martin Scorsese movie. The Irishman came to Netflix after a theatrical release in fall 2019.

Directed by Scorsese, the film stars Robert De Niro, Al Pacino, and Joe Pesci in a tale based on Charles Brandt’s book I Heard You Paint Houses. The story follows real-life mob hitman and labor union official Frank Sheeran as he recounts the story of how he killed Jimmy Hoffa, a prominent American labor union leader.

Here’s everything we know about The Irishman, including release date, plot, and any Oscars the epic film received.

When did The Irishman premiere in theaters?

The Irishman premiered at the 57th New York Film Festival and a limited amount of theaters on November 1, 2019. A few weeks later, on November 27, the film made its way to Netflix, where it has been streaming ever since.

Is there a trailer for The Irishman?

Yes! Netflix debuted the official trailer for The Irishman on September 26, 2019, a little over a month before the film premiered in theaters.

What is the plot of The Irishman?

The official plot synopsis from Netflix for The Irishman says:

Robert De Niro, Al Pacino and Joe Pesci star in Martin Scorsese’s THE IRISHMAN, an epic saga of organized crime in post-war America told through the eyes of World War II veteran Frank Sheeran, a hustler and hitman who worked alongside some of the most notorious figures of the 20th century. Spanning decades, the film chronicles one of the greatest unsolved mysteries in American history, the disappearance of legendary union boss Jimmy Hoffa, and offers a monumental journey through the hidden corridors of organized crime: its inner workings, rivalries and connections to mainstream politics.

Who is in the cast of The Irishman?

How did The Irishman do at release?

It’s tough to get typical box office figures for The Irishman, considering it only played in theaters for a short amount of time before moving to Netflix. But the streaming service revealed that the film was the fourth most-watched Netflix film of 2019 and the fifth most popular Netflix release overall. Despite its limited run in movie theaters, it’s estimated that The Irishman grossed a worldwide total of $8 million.

What did critics have to say about The Irishman?

The Irishman has a 95% rating on Rotten Tomatoes and a score of 94 on Metacritic. Many critics praised Scorcese’s directing, though more mixed criticism was reserved for the length of the film and its use of CGI de-aging on its actors.

Did The Irishman win any awards?

This article was originally published on Feb. 25, 2019