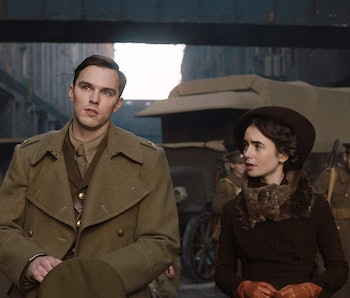 This article about the film Tolkien was originally published on March 6, 2019 and updated on April 28, 2021 following the film's release. Read on for the original article, with some new changes to reflect the latest updates on this topic.

British author J. R. R. Tolkien published The Hobbit in 1937, and in the decades that followed, his subsequent novels set within the fantastical world of Middle-earth went on to inspire just about every piece of fantasy literature since. But what inspired John Ronald Reuel Tolkien to write The Lord of the Rings in the first place?

New Line Cinema’s Tolkien, is a biopic all about the famed fantasy author, detailing his earlier years. According to TheOneRing.net, “The story focuses on the friendships, experiences, and romance that influenced Tolkien in his early years.”

Tolkien is directed by Dome Karukoski and written by David Gleeson and Stephen Beresford. Casual moviegoers probably won’t recognize any of these names, mainly because they haven’t directed or written anything of note. Nicholas Hoult stars as J. R. R. Tolkien, who spent most of his 20s fighting in World War I, long before he wrote The Hobbit. Lily Collins co-stars as Edith Bratt, Tolkien’s lifelong love.

Here’s everything else to know about Tolkien:

What was the Tolkien release date?

Is there a Tolkien trailer?

Yes. TheOneRing.net revealed the first trailer for Tolkien on February 12, 2019, and it feels much more like a teaser than a legitimate trailer.

“It’s a story about journeys, the journeys we take to prove ourselves,” Nicholas Hoult says as J. R. R. Tolkien in voiceover. “It’s about adventures. It’s about potent magic — magic beyond anything anyone has ever felt before, about what it means to love and be loved, about courage. It’s about fellowship.”

While we hear this, the trailer offers snapshots of Tolkien as a boy fascinated by a spinning lamp (just like P.T. Barnum in The Greatest Showman, for whatever that’s worth). In his school years, Tolkien walks or drinks with friends. There are also slightly more fantastical scenes with ornate costumes and romantic afternoons in the woods.

Interspersed are shots of a very real war: World War I.

A second trailer was released on March 6, and it offers a more coherent look at the film’s narrative with similar pieces of dialogue and scenes from the first. But there’s even more.

The second trailer showcases Tolkien’s real-life obsession with language. In his youth, Tolkien began developing the Elvish languages featured in Middle-earth, and the stories and legends that came after grew organically out of those initial efforts at world-building.

Tolkien follows the author through his youth into adulthood, but it seems like the bulk of this movie takes place before, during, and slightly after World War I when he was an adult.

How historically accurate is Tolkien?

Tolkien chronicled the lengthy stretch of Tolkien’s early years with a decent amount of accuracy — his experiences at Oxford as a young student and later, a professor, along with his courtship of Edith Bratt on the cusp of World War I. The historically accurate version of Tolkien’s life has enough drama that it would make for a decent film

But the entire film might be infused with elements of surrealism and familiar symbols meant to resonate with fans of The Lord of the Rings. As Tolkien fights his way through WWI, he imagines things like a fire dragon and a dark lord clashing with a white knight. The movie offers an assumption that he saw the pain of the war through this lens, which helped inspire characters and plot for his fantasy epic.

Is C.S. Lewis in Tolkien?

Most Tolkien fans are well aware of his famed friendship with fellow fantasy author C.S. Lewis. Yes, that means that the guy who invented Narnia was friends with the guy who dreamt up Middle-earth. They met as young professors in 1926 and formed a fast friendship that lasted decades.

So for anyone wondering if Lewis might be cast in Tolkien, we have sad news: The film covers up through Tolkien’s time in service, which ended in 1920. That’s more than half a decade before their meeting.

How did Tolkien do at the box office?

Tolkien grossed $4.5 million in the United States, and $4.4 million in other territories, for a worldwide total of $9 million.

What did critics have to say about Tolkien?

Tolkien has a 51% rating on Rotten Tomatoes, a score of 48 on Metacritic, and an A- on CinemaScore. The film also received vocal criticism from fans over not including more plot points about Tolkien’s faith, considering how seminal of a theme it was to his works.

More like this
Entertainment
Jan. 27, 2023
The Last of Us Season 2 renewal: Everything we know so far
By Eric Francisco
Culture
Jan. 28, 2023
Sci-fi legend René Laloux’s final movie is his most opaque — and maybe his best
By Jake Kleinman
Entertainment
17 hours ago
Knock at the Cabin's Ending is Shyamalan's Most Surprising Twist Yet
By Eric Francisco
LEARN SOMETHING NEW EVERY DAY.

This article was originally published on March 6, 2019