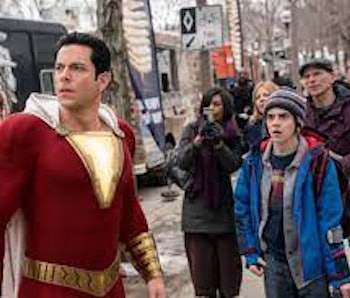 This article about the film Shazam! was originally published on January 30, 2019 and updated on April 25, 2021 following the release of the movie. Read on for the original article, with some new changes to reflect the latest updates on this topic.

Say the name and the power will flow through you: Shazam! Not to be confused with Kazaam, the 1996 movie starring Shaquille O’Neal as a rapping genie, DC’s Shazam!, directed by David F. Sandberg (Annabelle: Creation) is a film starring one of the oldest — and once upon a time, the most popular — comic book superheroes ever.

The next film after Aquaman to be set in the DC extended universe, Shazam! is the story of a young orphan boy, Billy Batson (Asher Angel) endowed with powers of the gods. Upon uttering the word, “Shazam,” Billy can turn into a mighty titan (Zachary Levi) with ultra strength, super speed, super intelligence and instincts, bulletproof skin, and even the ability to fly. Almost.

Here’s everything else you need to know about Shazam, both the character and the film.

When was the release date for Shazam!?

Shazam! was released in theaters on April 5, 2019. However, DC fans got to see the film two weeks earlier if they bought tickets through Fandango’s Early Access.

Is there a trailer for Shazam!?

Yes. The final trailer for Shazam! is embedded below.

What’s the plot of Shazam?

We all have a superhero inside us, it just takes a bit of magic to bring it out. In Billy Batson’s case, by shouting out one word—SHAZAM!—this streetwise 14-year-old foster kid can turn into the adult superhero Shazam, courtesy of an ancient wizard.

Still a kid at heart—inside a ripped, godlike body—Shazam revels in this adult version of himself by doing what any teen would do with superpowers: have fun with them! Can he fly? Does he have X-ray vision? Can he shoot lightning out of his hands? Can he skip his social studies test? Shazam sets out to test the limits of his abilities with the joyful recklessness of a child. But he’ll need to master these powers quickly in order to fight the deadly forces of evil controlled by Doctor Thaddeus Sivana.

Making his debut in February 1940 in Whiz Comics, from the now-defunct Fawcett Comics, “Shazam” was first introduced as “Captain Marvel” and quickly became one of the most popular characters in the 1940s.

Yes, DC has a character that shares the exact same name as the Marvel superhero. No, they’re nothing alike. (We’ll explain all this later.)

Captain Marvel/Shazam, as we’ve said already, is the alter ego of Billy Batson, a misfit orphan boy from Philadelphia who is chosen by the ancient wizard Shazam to receive his power inherited from six Greek gods:

Upon yelling “Shazam,” Billy transforms into a superhero, temporarily aging and bulking up. But Billy is still a kid, and most of the fun with Shazam’s comics is seeing a boy on a joy ride with every fun superpower imaginable.

So he was named Captain Marvel?

He was! For many years, too. And when his stories expanded to include more characters, such as Mary Marvel (Billy’s sister) and Captain Marvel Jr., they were all known together as the “Marvel Family.” It was only recently (2011) when their name changed to Shazam and the Shazam Family. But let’s back up a bit.

While Shazam ruled comics in the 1940s, in 1953, DC Comics — then operating as National Comics — won a lawsuit over Fawcett, alleging that Captain Marvel was an infringement of Superman. Given that the superhero genre was in its infancy, National/DC’s argument had legs, and Fawcett was forced to cease publishing Captain Marvel. In 1972, DC licensed the character and brought him back, and then owned outright owned him in 1991. At that point, Captain Marvel/Shazam had a mini-comeback, appearing in books like The Power of Shazam! and in the acclaimed, deconstructionist miniseries Kingdom Come.

In between the lawsuit (filed in 1951) and the ‘72 revival, the trademark to “Captain Marvel” lapsed, allowing Marvel to seize the name for their own character who emerged in the ‘60s. That character would eventually become the Captain Marvel we know now, who is arriving in theaters in Marvel’s Captain Marvel just a month before Shazam!. What a world.

When in the DC timeline does Shazam! take place?

Who stars in Shazam!?

The following actors appear in Shazam!.

Will Shazam join the Justice League?

Maybe! Entertainment Weekly confirmed in 2018 that there are plans for that to happen, but only if the film performs well.

What Shazam comics should I read?

The film is primarily taking inspiration from Geoff Johns’ 2012 series Shazam!, which was originally published in several issues of Justice League and then collected in its own volume. Because it’s just one volume, Shazam! is one of the most accessible superhero stories to get into. But there’s also a ton of older material that is worth checking out.

How did Shazam! do at the box office?

Shazam! grossed $140.4 million in the United States and Canada, and $225.6 million in other territories, for a worldwide total of $366 million. Deadline Hollywood calculated that it made an overall profit of $74 million.

What did critics have to say about Shazam!?

Shazam! has a 90% rating on Rotten Tomatoes, a score of 71 on Metacritic, and an A on CinemaScore.

Will there be a sequel to Shazam!?

Yes! On April 8, 2019, TheWrap reported that Shazam! will be receiving a sequel featuring the same cast, writer, and director. In 2020, the title was confirmed to be Shazam! Fury of the Gods and set to release in June 2023.

This article was originally published on Jan. 30, 2019