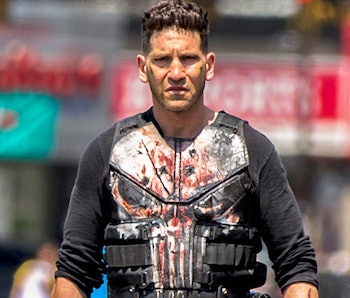 This article about Season 3 of the superhero series The Punisher was originally published on February 19, 2019, and updated on April 27, 2021 following the cancellation of the series. Read on for the original article, with some new changes to reflect the latest updates on this topic.

Is Frank Castle’s story over? With two seasons of The Punisher in the books, fans are curious to know when and if, Season 3 will ever come out.

In 2019, Marvel’s The Punisher was canceled by Netflix, along with Jessica Jones. With Daredevil, Luke Cage, and Iron Fist already having received the axe. The Marvel/Netflix universe is now officially over.

The announcement of Netflix canceling The Punisher and Jessica Jones surfaced over Presidents’ Day weekend thanks to a Deadline report. The cancellation marked the end of a multi-show partnership between Disney-owned Marvel and Netflix in a deal going back to 2013.

The original 2013 deal announced shows based on the characters Daredevil, Jessica Jones, Luke Cage, and Iron Fist, who would unite as the street-level team known as “The Defenders.” The Punisher, who was introduced in Season 2 of Daredevil, earned his own spin-off series after acclaim for actor Jon Bernthal (The Walking Dead) in the role.

Here’s everything we know about the future of The Punisher.

Is The Punisher renewed for Season 3?

No, the series will not return for a third season on Netflix.

In various interviews, Lightfoot came off as someone prepared to tell another 12-13 episodes but unsure if that opportunity would come.

“Some of the other shows have gone, but I’m still hoping that we get Season 3,” Lightfoot told Collider in a recent interview. “I’m taking the position where, when I made Season 1, it went out, and we didn’t know whether we would get a Season 2, but the show obviously did well enough that we got that Season 2 pick-up. So, I’m living optimistically, that we’ll get to go again.”

In a separate interview with ComicBook.com, Lightfoot said Season 2 was all about Frank Castle’s total evolution into “The Punisher.”

“Hopefully, people were like, ‘I can’t wait for Season 3 … and see what the hell he’s up to,’” the producer said.

In another interview with SYFY Wire, Marvel’s Jeph Loeb said it’s not Marvel’s decision to renew the series, but Netflix’s, which actually doesn’t sound very good when you consider all the Marvel content coming to the new Disney+ platform.

“That’s not our decision to make,” Loeb said. “It’s ultimately going to be Netflix’s call, as it is with every show. We are beholden to the network, and it’s the network who decides whether or not we’re going to do it.”

Will both seasons of The Punisher still stream on Netflix?

Yes. Netflix has confirmed that all of its Marvel shows will still be available to stream for the foreseeable future.

Why was The Punisher canceled by Netflix?

After a fruitful partnership that resulted in the “Defenders” franchise of shows, Disney is now preparing to directly compete against Netflix with its own streaming service, Disney+, set to launch later this year.

The original Marvel/Netflix deal operated as a type of licensing deal in that Disney allowed Netflix to use its characters while Netflix had the right to cancel the shows. Netflix also funded production, and like any live-action superhero story, these shows were pretty expensive to make.

With Disney gearing up for its “Netflix rival” at the time, it ceased making sense for Netflix to continue funding shows that basically advertised a competitor.

Will Marvel use these characters again in the MCU?

Probably? But if they do, it won’t be anytime soon.

While Marvel producer Jeph Loeb said in an open letter to fans that the Defenders are “to be continued,” there is an alleged two-year wait for Marvel/Disney to use these characters in any capacity following the date of Netflix’s cancellation.

While this detail in Marvel/Netflix’s contract is known from reporting — there is no official statement from Marvel or Netflix regarding the matter — it is well-known enough that some actors have commented about it to the press.

Actor Royce Johnson, who played Detective Brett Mahoney in episodes of Daredevil, Jessica Jones, and The Punisher, talked to ComicBook.com about the “two-year clause.”

“There is a clause that I heard through rumor that we have to wait 18 months, up to two years,” the actor said. And a two-year clause makes it difficult for actors to return to their roles, as they may be tied up in other projects by the time Marvel/Disney gets around to resuming these stories (if it chooses to).

“Will we get the same people? We don’t know that,” Johnson said.

Amy Rutberg, who played Marci Stahl in Daredevil and The Defenders, also confirmed the contract’s existence in an earlier interview with Inverse and suggested there might be a way for Disney to circumvent that waiting period.

“There is this very real contract with Netflix,” she said. “I had heard 18 months, maybe it’s 2 years. I suppose it’s possible that Marvel could buy them out, but I have not heard so much as a whisper.”

As for where The Punisher and these other characters might show up next, there’s a few different possibilities. We might see them turn up in future Marvel movies or Disney+ series. In fact, the rumor mill has been churning heavily in the past year, with whisperings of Matt Murdock and Jessica Jones showing up in the upcoming Spider-Man: No Way Home and She-Hulk, respectively. Even so, there’s no word on a Frank Castle return, even in gossip. For now, the only thing we know for sure is that the Netflix shows are over.

All of Marvel’s The Punisher is streaming now on Netflix.