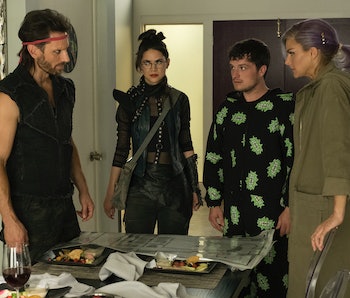 This article about Season 3 of the series Future Man was originally published on April 17, 2019 and updated on June 13, 2021 following the release of the season on Hulu. Read on for the original article, with some new changes to reflect the latest updates on this topic.

Future Man might be both the smartest and dumbest show on Hulu all at once. The original sci-fi series from the minds of Seth Rogen and his long-time writing partner Evan Golberg released its third and final season in April 2020.

Here’s everything we know about the Future Man Season 3 release date, plot, cast, and more.

When was Future Man renewed for Season 3?

Deadline reported on April 9, 2019 that Future Man would return to Hulu for a third and final season.

When is the Future Man Season 3 release date?

The final season of Future Man was released all at once on April 3, 2020.

Is there a Future Man Season 3 trailer?

Yes! The final Future Man trailer released in March 2020, only a week before the season dropped. You can check it out below.

Speaking to Metro, Future Man’s co-creators Kyle Hunter and Ariel Shaffir explained that after parodying The Terminator in Season 1 and Mad Max in Season 2, Season 3 could turn to another classic sci-fi series: Back to the Future.

“We actually have a pretty good idea of how the entire structure of next season might go if we get another season,” Hunter said. “We’ve always leaned heavily into the nostalgia of some of our favorite sci-fi movies and TV shows, the ones that we’ve grown up with. Back to the Future is one of the big ones. So we might just follow that trilogy and spend some time in the Old West next season. Who knows?”

Season 3 ends up picking up right where Season 2 ended, with Josh, Tiger, and Wolf being forced to compete in the “Diecathalon.” However, the trio is able to escape and continue their shenanigans through time and space.

Who’s in the cast for Future Man Season 3?

Naturally, Future Man’s three stars Josh Hutcherson, Eliza Coupe, and Derek Wilson were back for the final season. Seth Rogen also returned as Susan in Season 3, taking on a larger role as he attempted to appeal to his bosses to keep his new robot family.

All of Future Man is streaming on Hulu now.