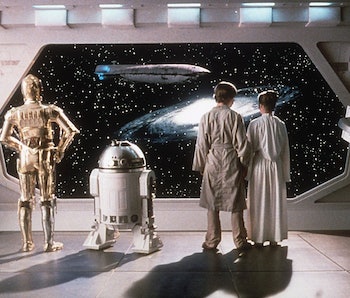 Star Wars lore is complicated. There’s the canon, including nine flagship films and more recent stories told across comics, novels, and TV series. Then there’s a huge submerged iceberg of non-canon Star Wars stories, including literally everything else, from the Thrawn trilogy to Luke’s clone Luuke and everything in between.

Since the canon reset in 2014, triggered by Episode VII: The Force Awakens, there haven’t been many more entries to “Star Wars Legends,” another name for non-canon stories. But the Marvel Cinematic Universe could be offering Lucasfilm the blueprint for a new anthology series that could make brilliant use of Legends. Here’s how that would work.

Marvel’s latest series What If...? follows The Watcher, a mythical being observing the multiverse as new alternate realities are explored each episode, all with the aid of vivid animation. What if Peggy Carter had received the super-soldier serum? What if T’Challa had ended up with Star-Lord’s origin story? What if the Avengers... were zombies?

Here’s another tantalizing hypothetical: what if... Star Wars had its own What If...?

Just as Marvel movies and series are based on existing comics, Star Wars once introduced its own alternate-history comics, known as Star Wars: Infinities. However, these stories were mostly revisionist takes on the original trilogy (with flashbacks to the prequels). A new Star Wars: Infinities series could bring this same penchant for reinvention to recent works like The Clone Wars, The Mandalorian, and even, yes, the sequel trilogy.

Here are five ideas for a Star Wars alternate universe anthology, with something for every fan.

1. What if Luke and Leia switched places?

Luke Skywalker is the viewpoint character for the audience throughout the original trilogy. Why not show what would have happened if Bail Organa had adopted Luke and not Leia, leaving the would-be princess on Tatooine as Luke grew up in royalty. Would Han still have met and fallen for Leia? Would Leia be more open to training with Yoda? Would a non-trained Luke be more vulnerable to the Dark Side?

2. What if Anakin had believed Fives?

Clone soldier Fives fought valiantly to uncover the truth about a Sith conspiracy to manipulate clones’ inhibitor chips. After Tup’s premature activation, Fives tried to convince anyone who would listen that Supreme Chancellor Palpatine was behind a massive conspiracy — to such a point that he was willing to die for this cause.

But what if Anakin took Fives’ word seriously, uncovering the truth about Palpatine early on. Could the future Emperor have been defeated?

One of the smallest Star Wars moments to have a massive impact on the franchise occurred when an R5-D4 droid blew a motivator yards away from the Jawas it had been bought from. After this, the Jawas replaced the droid with R2-D2, placing Princess Leia’s urgent dispatch — and the Death Star plans — in Luke’s hands.

Thanks to The Mandalorian, we see where R5 ended up — with lovable Tatooine mechanic Peli Motto. Had the two droids switched places, could we have seen Peli become one of the key members of the resistance?

4. What if Rey really was a nobody?

I don’t need to tell you Rey’s true identity was a divisive issue. First, Rey was a nobody, then she was a Palpatine. Finally, she was a Skywalker. But what if Rey really was the nobody Kylo had insisted she was? What if none of Palpatine’s clones survived that strange process? It wouldn’t change much of the existing plot — and that’s the point. Rey can just be Rey, and that’s okay.

5. What if Obi-Wan died instead of Qui-Gon?

The loss of Qui-Gon Jinn hits hard even more than 20 years later. But what if his padawan, Obi-Wan Kenobi, was slain by Darth Maul instead? Anakin would have been trained by the calm, cool, and collected Qui-Gon. Would this have prevented him from falling to the Dark Side? And if he had, would an elderly Qui-Gon have trained Luke?