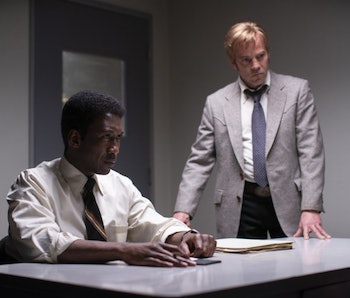 This article about Season 3 of the drama True Detective was originally published on December 12, 2018 and updated on April 22, 2021 following the release of the season on HBO. Read on for the original article, with some new changes to reflect the latest updates on this topic.

We thought it would never happen after the misfire that was Season 2, but True Detective Season 3 was able to return with two new detectives and an exciting new mystery. Here’s everything we know about what happened during Season 3.

When was the True Detective Season 3 release date?

HBO confirmed in October 2018 that the series will return on Sunday, January 13, 2019. The show aired on Sunday at 9 p.m. (HBO’s prestige spot typically reserved for shows like Game of Thrones and Westworld) and ran for eight episodes.

Who were the cast and director for True Detective Season 3?

The star this time is Mahershala Ali (Luke Cage, Moonlight) in the role of state police detective Wayne Hays. He was joined by Stephen Dorff, who plays a state investigator; Carmen Ejogo, a teacher connected to a mysterious crime; and Ray Fisher as Hays’ son, Freddy Burns.

Aside from Ali, there aren’t many huge stars in the True Detective Season 3 cast, which has typically been one of the show's biggest draws. However, the actor has already proven who can plot serious roles in Oscar-winning movies like Moonlight while also hamming it up as a Marvel villain in Luke Cage. So HBO likely has high hopes that his presence will be enough to convince people to watch.

As for the director, as with many TV shows, that responsibility is being shared. Series creator Nic Pizzolatto, who wrote the entire season except for Episode 4, which he co-wrote, will direct for the first time this season. He’s joined by Daniel Sackheim (Game of Thrones, Ozark, Better Call Saul) and Jeremy Saulnier (Hold the Dark, Green Room).

Is there a trailer for True Detective Season 3

There are two, actually. You can watch the latest at the top of this post, and check out the mysterious first trailer for Season 3 below:

Similar to the original season of True Detective, Season 3 plays with time in the way its story is told, exploring a mystery as it unfolds throughout three distinct points in time. An earlier trailer for the show also quoted Ali’s character saying, “My whole brains a bunch of missing pieces” while cutting between older and younger versions of the character. So clearly, you can expect to see the detective show up in multiple time periods as he struggles to find the truth.

In a December 2018 announcement, HBO offered a synopsis for True Detective Season 3:

Playing out in three separate time periods, the third season tells the story of a macabre crime in the heart of the Ozarks, and a mystery that deepens over decades. Mahershala Ali (Oscar winner for “Moonlight”) stars as state police detective Wayne Hays, with Stephen Dorff (“Somewhere”) starring as Roland West, the detective who investigated the case with Hays, and Carmen Ejogo (“Selma”) starring as schoolteacher and writer Amelia Reardon.

In 2015, retired detective Wayne Hays, his memory failing, looks back at the disappearance of 12-year-old Will and ten-year-old Julie Purcell, recalling the days and weeks immediately following the 1980 crime, as well as developments in 1990, when he and his former partner, Roland West, were subpoenaed after a major break in the case.

Filmed at locations throughout northwest Arkansas, the new season of TRUE DETECTIVE was written by series creator Nic Pizzolatto, except for the fourth episode, which he wrote with David Milch (HBO’s “Deadwood”), and the sixth episode, which he wrote with Graham Gordy (CINEMAX’s “Quarry”). Pizzolatto is also making his directorial debut with two episodes; other directors are Jeremy Saulnier (“Hold the Dark”) and Daniel Sackheim (HBO’s “Game of Thrones”).

Was True Detective Season 3 nominated for any Emmy Awards?

As is the case with previous seasons, True Detective Season 3 had some recognition from the Emmy Awards. It received only one Primetime Emmy nomination for Mahershala Ali (Outstanding Lead Actor in a Limited Series or Movie), ultimately losing out to Jharrel Jerome in When They See Us. The show was also nominated for 8 Creative Emmy Awards but lost them all.

This article was originally published on Dec. 12, 2018