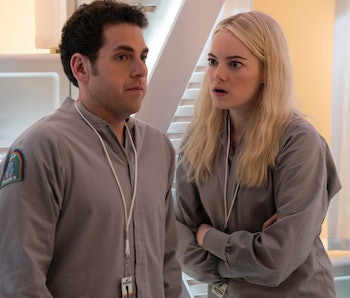 Time to go back to the lab? Netflix’s “limited series” Maniac is here to blow your mind, but you might want to take your time on this one rather than binge it all in one sitting. Seriously, there’s a ton of plot details and Easter eggs that are easy to miss after five hours in front of the TV. Regardless of how you watched it, by now, you’re probably long-done with the series, wondering, when (or if) Maniac’s Season 2 release will arrive, and maybe even considering a second (or third) viewing.

Here’s everything we know so far about a possible Maniac Season 2 release, including the latest statements from director Cary Joji Fukunaga and creator Patrick Somerville.

Will the Maniac Season 2 renewal ever happen?

Back in September 2018, director Cary Joji Fukunaga (best known for directing True Detective’s excellent first season) told Business Insider that he’s not interested in returning to the series, saying, “For me, I like to do one and move onto something else.”

However, that doesn’t mean Maniac Season 2 still can’t happen with another director at the wheel. Fukunaga went on to say that he’d love to see more episodes, even if he’s not involved:

“I’d be very happy if another season were to happen, but I think they were just thinking about this as a limited season and if there’s an appetite for another one then I think [show creator] Patrick [Somerville] would be happy to take it up and do it again. But not with me.”

Two months later, however, Fukunaga seems to have changed his tune entirely. Speaking to The Hollywood Reporter he admitted that he’s tempted to return to the world he helped create for what was supposed to be a one-season series:

Definitely. When you spend that much time writing and developing these things, they exist in your mind as if real people existed. We can very easily figure out how to continue that story if Netflix wanted to, but we also wrote it to be complete in one season. Were it to be turned into other seasons, there are ways to look at sequels. But we weren’t necessarily looking at it in a classic multiseason television way, throwing up a bunch of juicy morsels like bait for people to tune in for another season. We really tried to — as much as possible — satisfyingly end the story by the end.

But before you get too excited, it sounds like Somerville, who wrote the script for Maniac’s first season, isn’t interested in returning to that world at all. Speaking to The Hollywood Reporter, in September, he made it clear that there are no plans to continue beyond the current 10 episodes.

“No,” he said. This was always planned as a limited series.”

Somerville went on to argue that creating a limited series with no plans for a second season gave him the freedom to create a “more hopeful ending,” rather than relying on a dark cliffhanger to keep viewers on the hook until Season 2. Then again, he also understands the appeal of keeping a series running once the hard work of launching a successful show is complete.

“It is a tremendous amount of energy and imagination to just to make a new show,” Sommerville said, “and so you do have this feeling of wanting to hold on and keep using it, because there’s so much imagination in there.”

Then again, this wouldn’t be the first time a “limited series” ending up expanding into something more. HBO’s Pretty Little Lies launched under similar pretenses, but now a second season is expected in 2019. So never say never — at least when it comes to TV sequels.

Maniac is streaming now on Netflix.