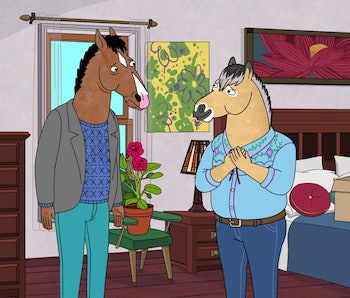 This article about Season 6, Part 1 of the animated series BoJack Horseman was originally published on November 16, 2018 and updated on June 12, 2021 following the release of the season on Netflix. Read on for the original article, with some new changes to reflect the latest updates on this topic.

After a fifth season that was equal parts hilarious and devastating, BoJack Horseman started its final lap in the fall of 2019. The first half of the extended Season 6 took the titular horse and his friends and enemies alike to new places in and out of Hollywoo. Here’s everything to know about part 1 of BoJack Horseman Season 6.

When was BoJack Season 6 confirmed?

On October 30, 2018, Netflix officially renewed BoJack for Season 6. The news was confirmed by the official Bojack Twitter account, which posted the following message:

It took a full year before Netflix announced that BoJack’s sixth season would be its last. Luckily, the streaming service was able to give plenty of notice to the team behind the show, as they could close everything out in their own way.

What was the release date for BoJack Season 6 Part 1?

How many episodes were there in BoJack Season 6 Part 1?

Part 1 of Season 6 ran for eight episodes total. With eight episodes in 2020’s Part 2, that makes for a sixteen-episode total season, an expansion from the other seasons that came before it.

Was there a trailer for BoJack Season 6 Part 1?

Yes! The trailer for Part 1 arrived just a few weeks before it premiered on Netflix. You can check it out below.

When it comes to the titular ‘90s star, Season 6 picks up where Season 5 left off, having checked himself into rehab after a disastrous down spiral into addiction while working on his new show Philbert. There, he learns to put his life back together, as well as look back on the poor decisions that got him to this point.

But BoJack isn’t the only character to undergo massive change during Season 6, Part 1. Princess Carolyn tries to settle into becoming a new mom after surprisingly adopting a baby in the last season finale. Diane goes on the road, where she finds new love and an opportunity to confront her depression. Mr. Peanutbutter has to handle the mounting tension of an impending wedding to Pickles. And Todd continues to get into shenanigans, including a harebrained scheme when he finds out his estranged mother needs his kidney.

The entire series of BoJack Horseman is streaming on Netflix.

This article was originally published on November 16, 2018