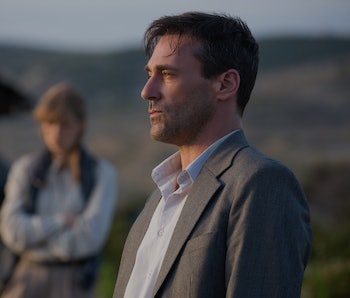 The new film Beirut, a period thriller set in 1980s Lebanon and directed by Brad Anderson, is nothing like a comic book movie. There are no scheming villains, no Infinity Stones, and the world isn’t in danger. But with Jon Hamm batting a thousand as an alcoholic negotiator, one can’t help but see Beirut as exactly the film that could convince any casting director to make Hamm into Batman.

Out in theaters on Friday, Beirut is the brainchild of screenwriter Tony Gilroy. It’s a well-executed, if somewhat overly long, throwback to thrillers that define the dadcore genre. It’s not James Bond, but it’s not terribly smart either. But Beirut is a gritty, realistic character drama that satisfies anyone looking for that sort of thing. And whatever flaws it has, it’s all made up for with an absolutely magnetic Hamm, who effortlessly convinces anyone watching Beirut that he could play a superhero. No question.

Taking place in the backdrop of the Lebanese Civil War, Beirut follows Mason Skiles, a well-educated, worldly U.S. diplomat who works as a negotiator. In the beginning of the movie, set in the ‘70s, Skiles leads a comfortable life in Lebanon: happily married, affluent, and fostering a local orphan, 13-year-old Karim (Yoav Sadian Rosenberg). Suddenly, after learning Karim’s brother is a notorious Palestinian terrorist who claims ties to the Munich massacre of ‘72, Skiles’s world is turned upside down. Ten years later, Skiles is waking up drunk from his car in Boston. A man who used to bridge foreign governments now fails to get local unions to agree on overtime.

Soon, Skiles is dragged back to Beirut when an old friend is held hostage by Karim, who has grown up in the ranks of his brother’s terrorist group.

But when Skiles is charming his guests at the beginning of the film, he’s Mr. Bruce Wayne. When Skiles is navigating the new Lebanon, deep into its civil war, he’s Batman surveying Gotham City. The essence of the DC hero is embodied by Hamm, who is simply a very good actor capable of range.

On the surface, there’s little that makes Skiles appear to be a proto-Bruce Wayne, a character Hamm himself is rumored to be gunning for after Ben Affleck finally calls it quits. Unlike Batman/Bruce Wayne, Skiles isn’t absurdly rich, doesn’t know martial arts, and Skiles stumbles where Batman would have planned his steps way ahead of emotions that ripple across on screen.

Putting aside the fact Karim’s a terrorist, his relationship with Skiles mirrors Batman and the second Robin, Jason Todd. Like Skiles and Karim, Batman welcomed Jason into his life only to lose him under bad circumstances. When Jason resurfaces as the violent Red Hood, adopting methods that offend Batman, there is a strong sense of love lost between them. Ditto goes for Skiles and Karim. When Karim glares into the eyes of his former foster guardian, there is a galaxy of emotions portrayed.

Beirut isn’t a bad movie. It is a “dad” movie; the movie dads love because it’s righteous white men doing their jobs in a war-torn nation of brown folks. Divert your attention and you have a well-crafted character drama, with great actors whose shared space on the screen communicate the tragedy of what didn’t happen: comfort, peace, and happiness. For Hamm’s Skiles, those are exactly the ingredients that turn a good man into a dark knight.

UPDATE: An earlier version of this story listed the film’s release date as April 13. The film was released in theaters on April 11. This story has been updated.

Beirut is in theaters now.

More like this
Culture
Jan. 23, 2023
5 years ago, DC released the best Batman movie you haven't seen
By Laura Kelly
Entertainment
Jan. 27, 2023
Onyx the Fortuitous and the Talisman of Souls is a cringe comedy as overlong as its title
By Andy Crump
Entertainment
Jan. 26, 2023
Talk to Me unleashes a gruesome ghost story on the TikTok generation
By Andy Crump
LEARN SOMETHING NEW EVERY DAY.
Related Tags
Share: