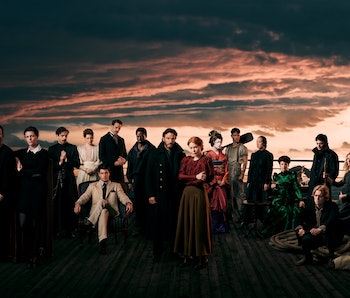 It’s almost been a year since Netflix’s first international hit, sci-fi epic Dark, wrapped up its multi-dimensional story. But the minds behind the most complicated show since Lost aren’t done yet. The follow-up to Dark, called 1899, is now in production, and the scale is even bigger and the production more ambitious than the German sci-fi series. Here’s everything you need to know about the upcoming show.

When will 1899 premiere on Netflix?

1899 the series has been in development since 2018, but while it’s been a long time coming, the wait is almost over. Production has officially begun, and 1899 has a unique method of making its 122-year-old world a reality: it’s being filmed in a soundstage with an LED backdrop run with Unreal Engine.

If that sounds familiar, it’s because it’s the same technology currently used to film The Mandalorian. It’s a state-of-the-art filmmaking method designed to make production easier as it doesn’t require extensive location shoots; the locations can just be rendered and projected.

“You literally take post-production and make it pre-production,” creator Baran bo Odar told Deadline. “Everything has to be decided beforehand, you have to create it, build it, so it’s all ready to shoot in-camera.”

While filming is just starting now, then, the process is much further along than it would be if it were filmed traditionally.

There’s no full-length trailer as filming is just beginning, but don’t worry — there is at least some visual ties to the series thanks to a teaser trailer. It doesn’t show much, just the image of a ship and the title, but a trailer’s a trailer.

According to the creators Jantje Friese and Baran bo Odar, the series is a multi-cultural look at multiple people traveling on a ship to America at the turn of the 20th century when they encounter another ship adrift in the ocean, and things take a turn for the worse. There aren’t many more details than that, but trust this series will be extremely global.

International accessibility has been a major priority for Netflix recently, and films like Space Sweepers prove how multi-lingual media can work for a global streamer.

“There will be points in the show where characters have problems communicating because of the languages – I don’t think it’s something we’ve seen before,” Rachel Eggebeen, Netflix’s director of International Originals, told Deadline.

Dark is a unique show spanning multiple generations and even parallel universes, so it’s difficult to imagine any show being similar.

Still, the creators have been able to draw some parallels between the two. Odar told Deadline: “Knowing that we did Dark, everyone can be assured that this is going to be something weird and wild and crazy, it’s going to be a fun puzzle for the audience. We are going back to our mystery roots.”

So don’t expect any time travel, but definitely prepare yourself for a twist-and-turning joyride across the Atlantic with major intrigue and lots of suspicion, with some culture shock and language barriers to make things even more interesting.

1899 is currently in production for Netflix.