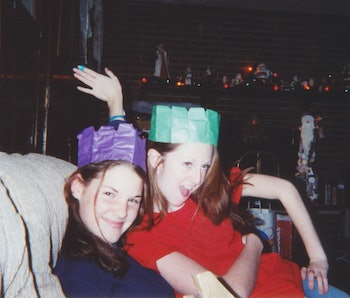 Think back to your childhood. December was the longest of months. It might have been filled with rehearsing school nativity performances, writing your wishlist, and savoring the morning's advent calendar chocolate. But at times, it felt like Santa would never arrive.

As an adult, it's a different experience. One minute it's summer holidays, barbecues, and sunburn, and then, in the blink of an eye, it's mince pies, tinsel, and turkey. Is it just me, or is Christmas coming around faster?

If you cannot believe the festive season is upon us already, you're not alone. My colleagues and I recently surveyed 918 adults in the United Kingdom (full results still to be published) and found 77 percent of respondents agreed Christmas seems to arrive more rapidly each year.

One reason may be the way we experience the passage of time changes as we age, often resulting in the feeling that time speeds up as we get older. For a seven-year-old, the 12 months between Christmases are a huge proportion of their life. For a 45-year-old, those same 12 months are a small portion of their experience. This difference in ratio compresses the relative time between Christmases each year.

Our experience of time also changes because we rely on memory to estimate duration. When we judge how long something lasted, we base our estimate on how many memories we made during the period of interest. Whether we are trying to remember the length of a film, car journey, or relationship, the number of memories we encode during it will serve as an indicator of its length.

Periods of time in which fewer new memories are made, either because there was a lack of stimulating tasks, novel activities, or heightened emotions, are interpreted by our brains as short.

Where has the year gone?

As we age, our memory becomes more fallible, and we recall less from our day-to-day lives. We’re also less likely to try new things than when we were younger. Together these factors may contribute to the sensation that less time has passed since last Christmas than we were expecting.

Because what we do has such a strong influence on how we experience time, changes to our routine distort the passage of time. A predictable day helps time flow steadily.

This was illustrated on a global scale during the pandemic. One minute we were all going about our daily lives. Then all of a sudden, our routines were scrambled. People from Buenos Aries to Bagdad reported an overwhelming sense time did not pass as normal during the pandemic.

While Christmas does not cause the same level of disruption as a global pandemic, it disrupts our habits.

Another factor that may make us feel like Christmas is here too fast is the amount of energy we put into anticipating it. For many children, Christmas is arguably the most eagerly awaited event of the year. Advent calendars count down the days until Father Christmas arrives. All this excitement means children pay a lot of attention to the passage of time in the run-up to Christmas. Unfortunately for them, focusing on the passage of time typically makes it drag.

For most adults, Christmas is less thrilling. So adults probably think less about the countdown. Paying less attention to time makes it pass more quickly. The effect may have been particularly pronounced this year because, in the post-pandemic normality, life is busier than ever, and we have even less time to think about Christmas.

Technological change also affects our perception of time. Advances in technology enable us to accomplish more tasks more quickly than ever before. This acceleration in the pace of life over the past 20 years may also contribute to the sensation that Christmas now comes around too soon.

Despite paying less attention to time, adults experience significantly more demands on their schedules than children in the run-up to Christmas. For children, Christmas happens by magic. For adults, however, the festive mystique is replaced by large amounts of planning, shopping, wrapping, and cooking. The added time pressure created by Christmas may contribute to time passing more quickly.

The lack of control children has over Christmas likely increases their level of temporal uncertainty. Not knowing when, or indeed if, something will happen can also slow the passage of time.

However, maybe we feel like Christmas comes around faster each year because it really does. In years gone by, Christmas advertising wasn’t seen until the start of Advent. Nowadays, it is normal to see chocolate Santas on supermarket shelves in early October. This literal shifting of the Christmas timeline undoubtedly adds to the psychological sense of Christmas coming earlier.

However, retailers’ attempts to increase profits by starting the festive period earlier each year come at a price. When retailer Very.com launched its Christmas advertising campaign on October 7, 2021, there was public outrage. We don’t want to actually see Christmas coming around more quickly. Very didn’t repeat their mistake this year.

This article was originally published on The Conversation by Ruth Ogden at Liverpool John Moores University. Read the original article here.

More like this
Mind and Body
Jan. 21, 2023
Procrastination study suggests a link to shoulder pain, bad sleep, and more
By Eva Skillgate, Alexander Rozental, Fred Johansson and The Conversation
Mind and Body
Jan. 15, 2023
Study reveals one brilliant brain hack that can unlock your creativity
By Lily Zhu and The Conversation
Gaming
Jan. 15, 2023
Do video games make you smarter? One surprising genre leads the rest
By Richard E. Mayer and Knowable Magazine
LEARN SOMETHING NEW EVERY DAY.
Related Tags
Share: