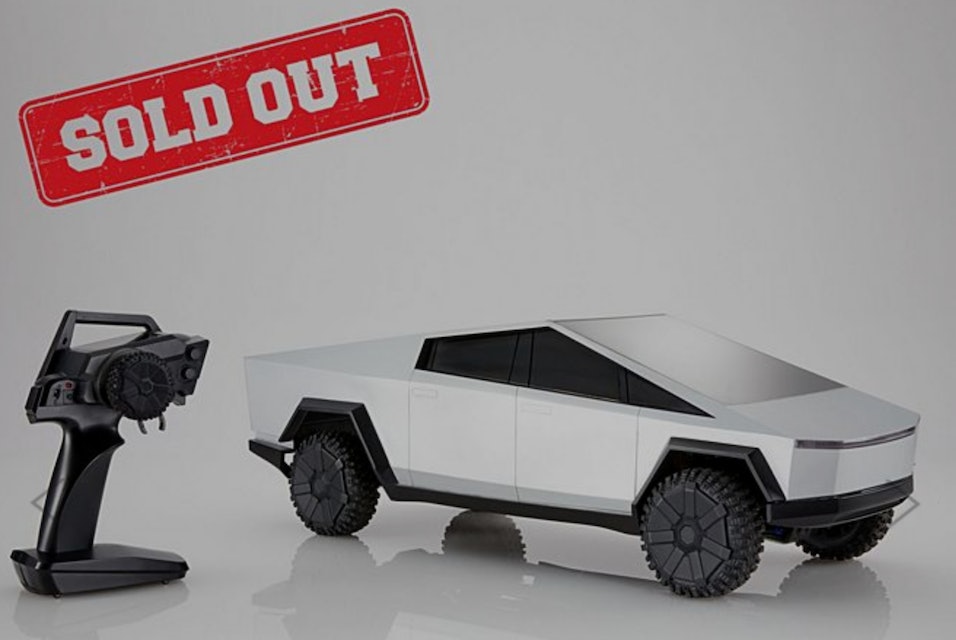 The Cybertruck, Tesla’s all-electric, battery-powered truck, is expected to begin production in 2021 with models available for sale in 2022. If you can’t wait, the company has announced an unexpected crossover campaign with toy maker Mattel: two toy versions of the truck, one remote-controlled and the other in the classic style of the toy company’s Hot Wheels.

“What happens when you take the fearless innovation of the #Cybertruck and pair it with the outrageous daredevil spirit of #HotWheels?,” asks a Friday tweet from the El Segundo, California-based company. “You get the Hot Wheels R/C Cybertruck. Coming in a limited-edition 1:10 scale model and 1:64 model.”

The 1:10 model, which is operated by radio remote control and has a price of $400, sold out within hours. There’s an option to join the waitlist, but the quick-triggers who made the initial purchase can expect their model car by the end of the year in December, 2020.

The RC model offers 250 MPH “scale speed,” which roughly translates to 25 MPH. Similarly, the 1:64 model offers a 500 MPH scale speed when it goes into Sport Mode, which equals out to around 7 MPH. Pretty impressive for a car that’s just 3 inches long, it’s $20 and still in stock. For comparison, a five-pack of Hot Wheels cars inspired by the Fast & Furious movies costs $10.95 on Amazon.

The companies worked in close collaboration on the design. On its website, Mattel has a picture of its VP of Design, Tim Wu, and veteran Hot Wheels designer Gerry Cody meeting with the chief designer of all things Tesla, Franz von Holzhausen.

“Three-dimensional prints of the Cybertruck’s unique frame were generated at multiple scales to ensure accuracy and integrity of the revolutionary exoskeleton,” Mattel says, referencing how the Cybertruck’s design moves its mass to its exterior, contrary to the design of traditional trucks like the Ford F-150.

The accuracy didn’t end with the exoskeleton. The Hot Wheels design team “took cues from the spacious interior and glass-covered, peaked roof to recreate the Cybertruck’s magic inside and out,” according to the company.

But getting the design right doesn’t guarantee 100 percent accuracy. Buyers won’t be truly purchasing a tiny Cybertruck, built out of an ultra-hard 30X stainless steel alloy that’s also used to build SpaceX rockets. These models appear to be built out of plastic. “Look, we don’t know if it’s ‘literally bulletproof’ like it’s life-size inspiration, but we can guarantee that it is ‘literally awesome!,’ the company says in its description of the 1:64 model.

One detail in the model cars shows how Tesla is doing its best to own a now-infamous mistake. During Musk’s initial presentation of the Cybertruck, he challenged von Holzhausen to throw a metal ball at the car’s windows, saying they wouldn’t break. While they didn’t break, they shattered in a particularly ugly way.

Mattel ends its promotional video for the toy car in a similar fashion. But this time, the person throwing the metal ball isn’t von Holzhausen at all, but rather Skeletor, enemy of He-Man and main antagonist of the Masters of the Universe series, also created by Mattel. The video ends with a "To be continued..." frame.

Inverse has reached out to Mattel to ask about the future of Cybertruck versus Skeletor, but has not yet received comment.